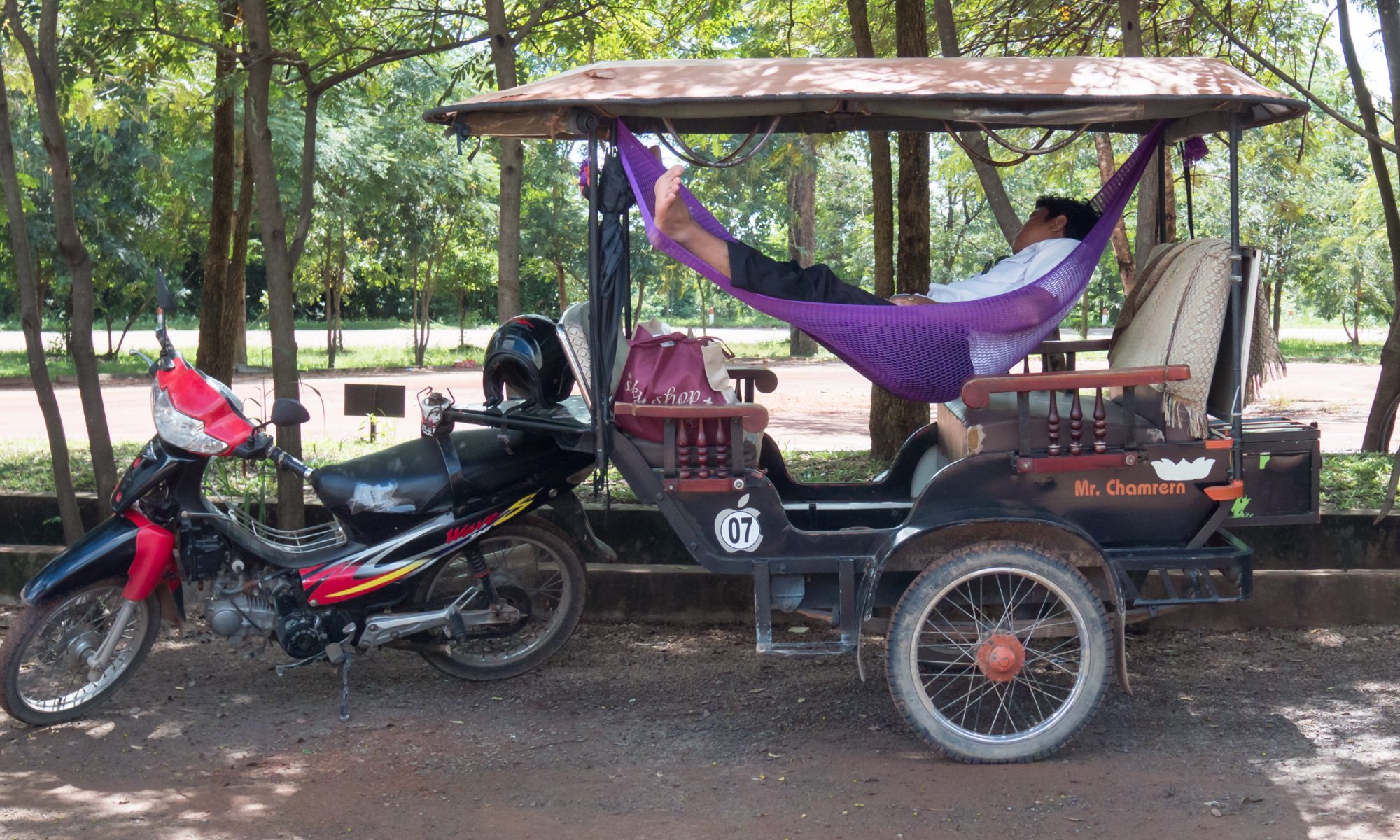 Traffic in Cambodia is fairly hectic, there is little regard for road rules, but even compared with places like India the use of intersections with traffic lights is interesting. 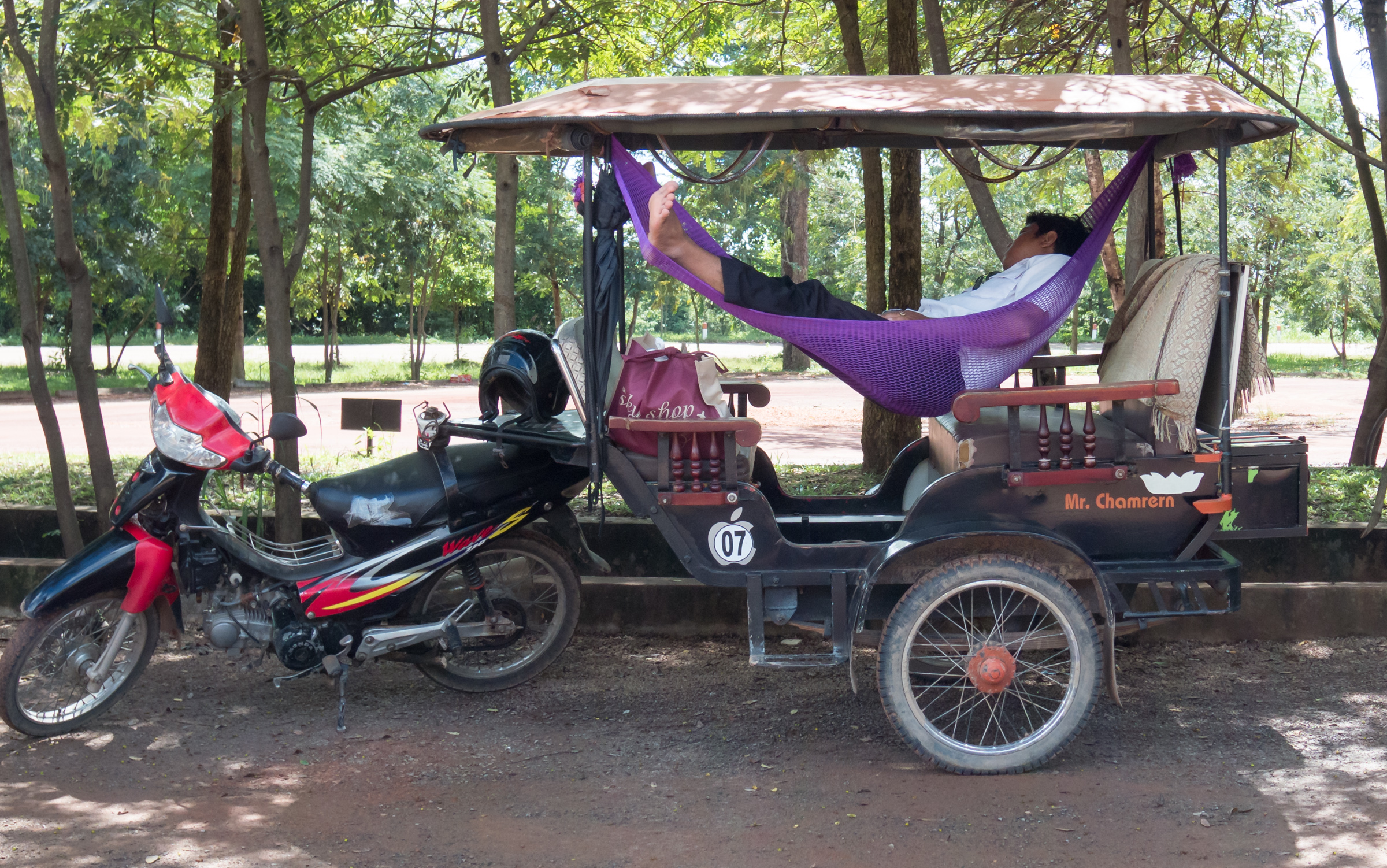 In India a three lane road with an intersection will mean five vehicles will line up and wait patiently for their turn to go. Usually the traffic isn’t quite so patient, but along with the lights there is often a police officer waving their arms in the middle of the intersection, and they really should be obeyed. This pattern of traffic movement through the intersection can be plotted using two sine functions. Here the blue and red represent the traffic from perpendicular roads. For example, north-south traffic flows, comes to a stop, and then east-west traffic flows, and they take it in turns. 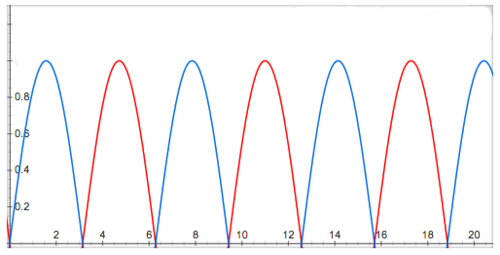 Traffic at a Cambodian intersection can also be modeled with two sine functions, but they are slightly more complicated. Again blue represents north-south traffic, and red east-west traffic. 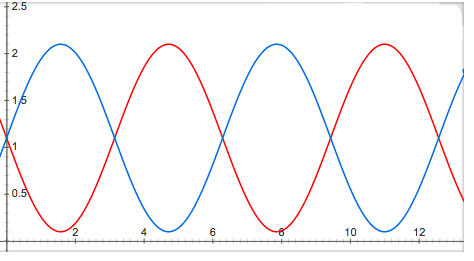 The Heisenberg uncertainty principle at work. Would room have been there if you hadn’t gone?

The total amount of traffic in the intersection at any one time seems to be a constant, and as the lights change the different directions of traffic make up the majority, but not the total sum of the traffic. This sounds like chaos, and it isn’t far off. But if this is what you expect at an intersection, and if everyone plays by the rules (there are none) then the system works. Where this all falls down is when someone enters an intersection and thinks they should adhere to the rules. They slow down, they stop, and wait for traffic. The approaching traffic saw them coming, they had already started to slow down and move in their lanes giving them space to move into and get through. They aren’t sure what to do now, they had given way to the other vehicle who is now completely stationary for no particular reason. A horn goes off.

It is quite common when approaching an intersection to make a decision on where you will exit the intersection based on what other traffic is around. I was going to go straight, but as that bike came out of no where and the bus isn’t moving, I’ll just turn right instead. No point waiting for the lights to change, I might hold up those behind me.

Other factors that will be taken into account when approaching an intersections are:

Because the traffic from any direction will never reduce to zero, when you are a pedestrian trying to cross the road at an intersection, you need to be proactive. Look for a gap big enough and start walking, and start walking. It is not unheard of to catch a tuk-tuk from one side of a busy road to the other.

“I think the lights have changed, and it is our turn.”

Drivers in Melbourne, and most cyclists will be aware of the hook turn. A manoeuvre that is used to make turns across traffic at intersections where it is not possible, or not safe to wait in the middle of the road. You merge over to the ‘wrong’ side of the road for your turn then stop and wait for the traffic to start flowing in the direction you wished to turn. 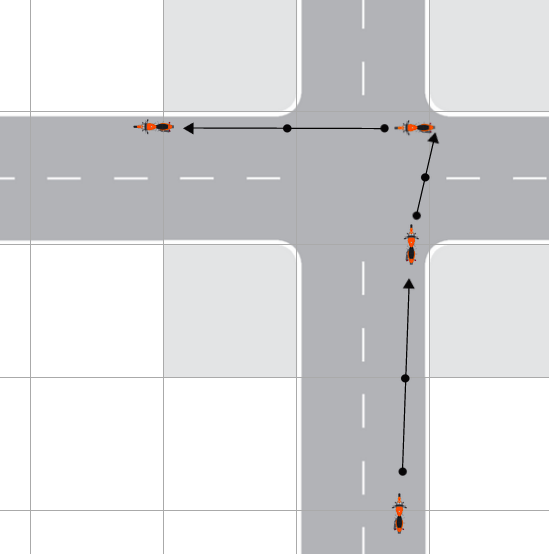 This manoeuvre is used extensively throughout Asia, but not in the same way as it is in Australia.

If you know you need to make a turn across the road there will be a point up to about 600m out from the intersection where you start looking for a gap to merge across the road, and continue towards the intersection on the wrong side of the road. The gap just needs to be big enough for you to get over to the wrong side of the road, once there the oncoming traffic will simply flow around you. At the intersection it is a simple left turn, into oncoming traffic. Then you start looking for a gap to merge back over to the correct side of the road. At no point during this manoeuvre does it matter what colour the traffic lights are. 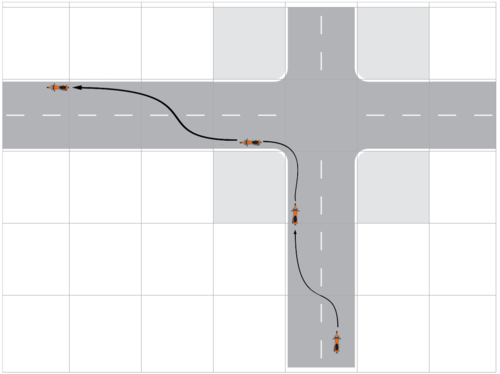 Of course, all of this goes out the window if you are a Lexus SUV, or there is a handily placed petrol station on a corner. Both of these grant you the ability to ignore all traffic signals.

Tourist from India other places must find the way traffic works in Australia so boring, and inefficient.