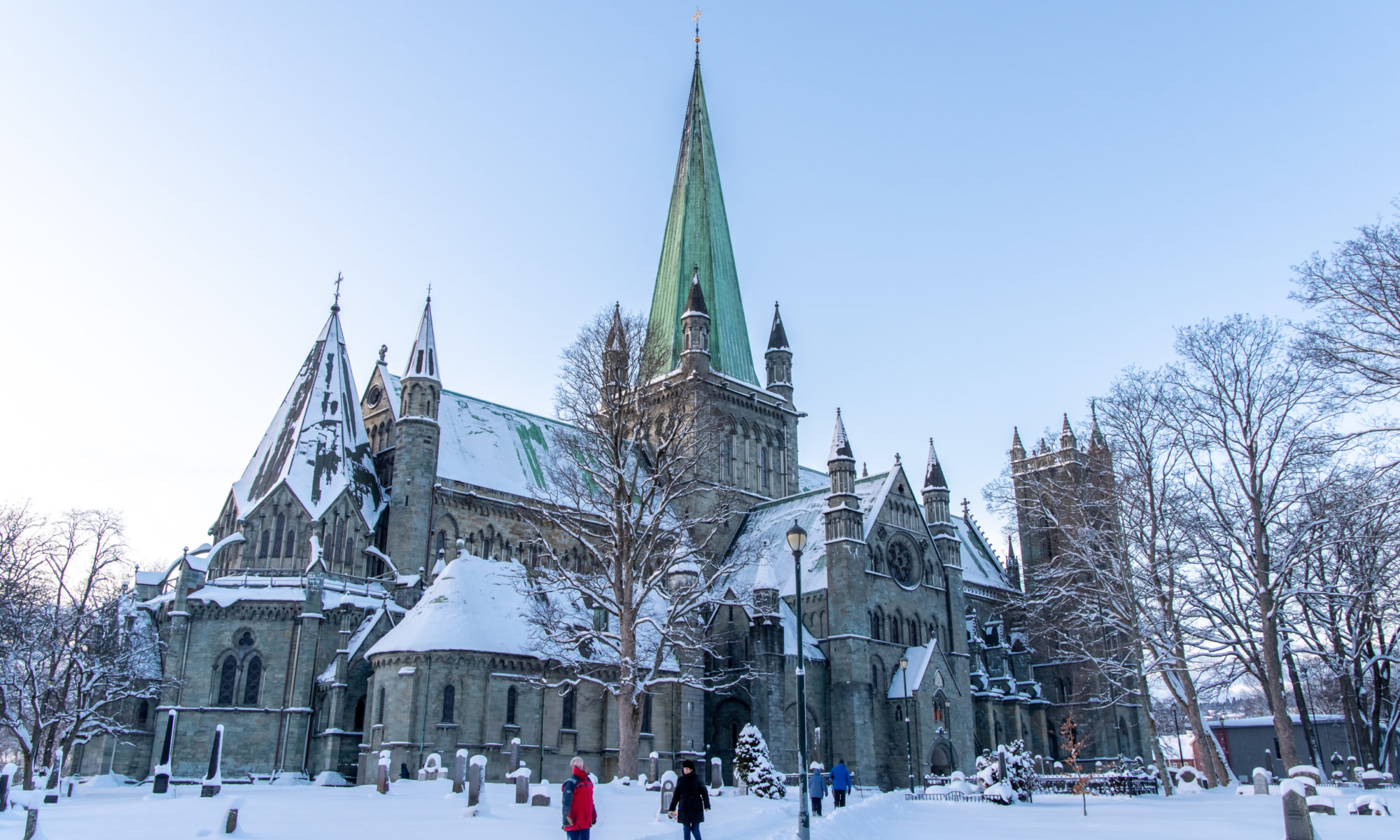 In the morning I got my gear into my bag and set out for a walk into town. I wasn’t sure where I was going to end up, but went down to the river. There was a lot of snow on the ground, and I had my spikes on my boots

There was a little pier that seem to only be there for people to take photos across the river. I wasn’t the first out to it, I could see footprints in the snow.

I set my bag down in the snow and set up my tripod. I wasn’t happy with any of the photos I got in the morning, but I went back in the evening another day knowing what I wanted to to try and capture.

I climbed back up to the bridge and took some more photos up and down the Nidelva (the River Nid).

Walked further down the street, making sure to not get too close to any buildings. I had spotted little temporary barricades setup around areas with particularly nasty looking icicles to keep people away from them if they do let go.

I managed to find a path through to the cathedral, it was mostly clear of snow and seem to be a popular place for a walk in the morning.

Around the front I setup my tripod to try and get some shots.

I went to check out the gift shop and to see about going in side, but photography wasn’t permitted inside the cathedral, I did end up going in and having look around.

I went back at night to get some more photos of the cathedral.

One thing I wasn’t expecting to see was a large British naval flag hanging up. It is the flag from the HMS MacKay that was one of the first ships to arrive in Trondheim in May 1945 as part of the liberation of Norway. When I was in Oslo I visited the resistance museum. I was not aware the Norwegian leaders, including the King were in exile in England.

At this point I decided it was time for breakfast (coffee) and a snack. I headed back to the Old Town Bridge and across the river.

I went inside and managed to order a coffee a pastry. The person behind the counter said I could sit down, so I did. I found a little book to read while I waited.

After a while I realised my coffee was ready to be collected from the counter, and I had misinterpreted the direction to sit down as an implication that they would bring over my food.

The coffee was good, it was also a volume that could easily be measured in Olympic Swimming Pools, or Sydney Harbours. It also had no handle on the cup. It was a large soup bowl of hot coffee.

I finished my coffee, donned my coat, my gloves, my hat, my scarf, and headed back outside.

There was an attraction in Trondheim I had seen on TV, and I was keen to find it if I could. A powered cycle lift thing that helps cyclists get up what has to be one of the steepest hills around.

Unfortunately is caked with snow and frozen over in winter.

As a foreigner, I had not yet developed the ability to walk on ice without falling over. I started up the ice covered hill and was thankful to make it to the railings that allowed me to pull myself along, dragging my feet behind me.

At the top of the hill I found the Kristiansten Fortress. It was mostly closed up for the winter, but you got amazing views of the city from up here.

I had a wander around the top for a little while. Some local kids ran up to me and asked me something in Norwegian that I didn’t understand. I tried using my phone to translate what they were saying, like the promotional videos show, but it just couldn’t understand them, or me, or both. The kids then ran off again somewhere.

The next place I planed to visit was back down the hill, and across town. I didn’t want to slide back down the hill in the snow so I decided to try and book (and pay) for a taxi in an app. It took me a moment to get something installed and set up with a payment method, but the hardest part was trying to set a pick up address of “carpark at the old fort at the top of the hill” – so I found the number of a house on the street and used that. I think the taxi driver was almost surprised to see me waiting outside on the street when he pulled into the driveway.

Norway has a strong culture metal music, as does Sweden and Finland. They had a wooden hut setup. On a desk was a cassette player with different tapes. Switching tapes played different music videos. It was a really fun way of playing different music.

After the museum I walked back to the hotel. It is then that I discovered one of the two bridges over the canals was broken. It was able to raise and lower to let boats through. It seemed to have tried to close at a funny angle and the results were not good.