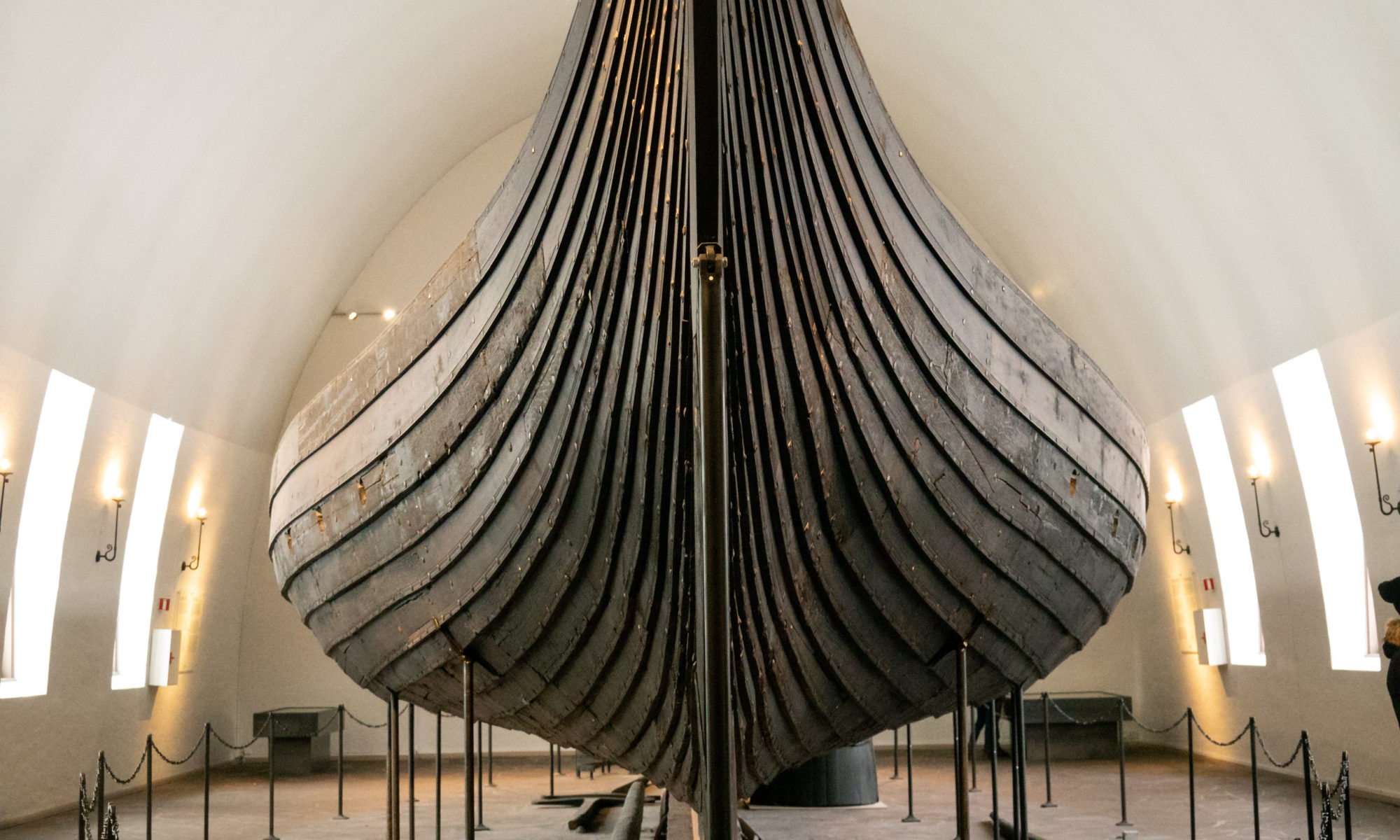 Yesterday was seeing Oslo from a boat, today I set out to see some boats. I had an Oslo card that included unlimited public transport, and Google Maps – between these I was able to get on a bus heading north out of town and around the edge of the fjord to a Viking Boat Museum. I don’t usually like busses, but these one did have USB charging ports in each seat.

My Oslo pass that I used to catch the public transport also got me into the museum for no extra fee. The museum holds 3 large ships from the 9th century.

The first ship was The Oseberg Ship. It was found in a large burial mound in Slagen in 1903. Originally built AD 820 it has been used for a number of years before serving as a grave ship in AD 834 for two prominent women.

The second ship was found in Gokstad. It was also used as a grave shipped, this time for an influential man who was buried with household items, 64 shields, twelve horses, eight dogs, falcons and two peacocks. The skeleton show that the man had been killed in battle.

The third ship was from the Oslo area, built around AD 910. Its location had been known to locals for sometime, and was excavated in 1867. It was the latest known burial ship in Norway.

Outside the museum there was a red phone box, with a little story inside.

100 telephone boxes remain in Norway – and this is one of them!

They were protected for their culture importance in 2007

At most, there were over 6000 such telephone boxes in use all over the country, but the arrival of new technology and communication possibilities reduced the demand for the little red houses

Even if the ring tone is gone, our telephone boxes have important stories to tell Stories of a time when you couldn’t carry your phone around in your pocket. Stories about us.

I caught a bus further round the peninsular to two other museums right on the waterfront.

The first museum I went into The Fram Museum, dedicated to polar exploration. It includes the Fram, a 19th century polar exploration vessel, and the Gjøa, the first vessel to sail through the entire northwest passage.

The museum is set up in a-frame buildings, housing the ships. You are able to get onto the boats and look around.

The Fram was fascinating. I was able to climb through the cabins, engine room, and the main deck. One of the things I really liked was a windmill on the deck. It was used to generate electricity to power radios and lights on the ship, in the 1890s.

The method of trying to locate the north pole seemed to be to sail into the ice drift, get stuck, and float around and see where you end up.

Before I left the area I stopped in at the Norwegian Maritime Museum. Like the Danes the Norwegians are incredibly proud of their maritime history. This small museum had a number of scale models of vessels constructed in Norway going back to the 1st century. Including oil rigs, and modern tankers and cargo ships. I stopped for lunch in the cafe.

On my way back into Oslo I stopped off at an open-air cultural museum. I think it is a lot more active in summer – there was almost no one around at all.

They had a series of traditional buildings from different areas of Norway. In the summer I think they have people in traditional dress, and farm animals to pat, but it was too cold for them now.

After catching a bus back into town I set out for some domestic duties. I stopped by the train station to exchange my Sweden Krona which I had completely failed to use in Sweden for Norwegian Krone. It was usual to use cards in Norway, but they did at least accept cash, unlike Sweden. The next stop was a coin laundry. For the cost of washing a single pair of socks at the hotel I did a complete load of washing, and had some time to look at photos on my iPad while I waited.

One Reply to “Boats in Oslo”