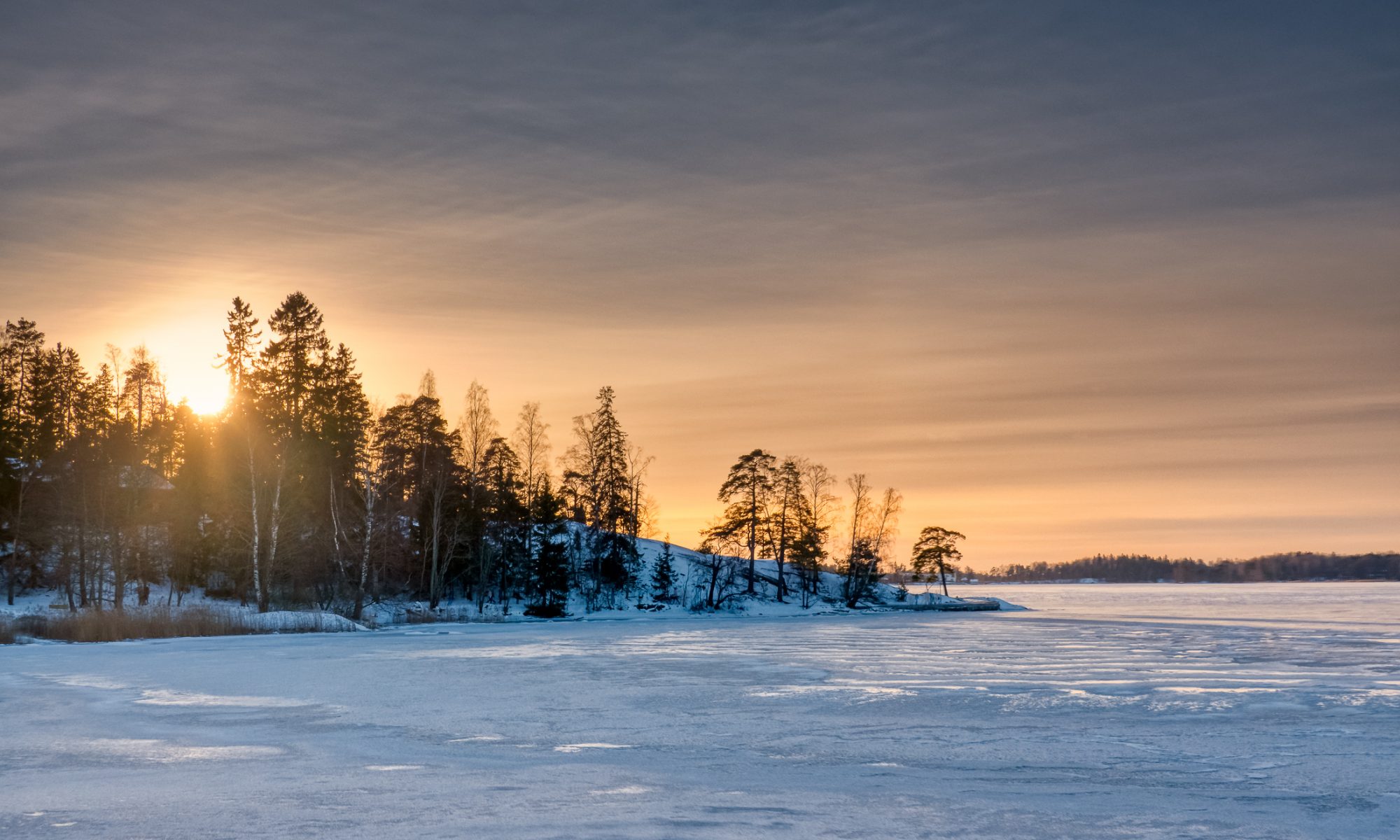 After flying back from Oulu to Helsinki I had a couple of days to get some washing done at my favourite coin laundry, and get some more photos around Helsinki before my flight to Stockholm.

On the first day I got up fairly early and walked in the general direction of sea, passing the Cathedral and the Senate Square, before spotting the first of the sunrise.

I wasn’t entire sure where I was going. There were a few cars on the road now, and a few more people walking around. The footpaths were very icy, and I was concentrating on not falling over as much as anything else. I worked out a bunch of people were heading to a ferry terminal, and a commercial wharf.

I walked back to the hotel to warm up again.

Lunch that day was from the tiny supermarket at the metro station under the hotel. This more eventful that it should have been. I found a make your own salad bar. You get a bowl and fill it with any combination of pre-made salads, cold meats, and dressings. I had at least 2 types of chicken, and 2 types of potato salad. I stuck a lid on it, and queued up to pay.

I had looked around to see if I could work out how to weigh and pay for it, but figured logic would ensue and I would be able to weigh it at the cash register. I queued and when I got the front I went through the familiar dance with the person working there.

I don’t speak a word of Finnish, but I know what they are asking, ‘Hello’, ‘Do you want a bag?’, ‘How are you paying?’, ‘Do you want a receipt?’ in that order. This has the side effect of instead of being recognised as an ignorant tourist, I just get confused for a quiet, and slightly withdrawn local, or a local (in Scandinavia).

They took my bowl of lunch and started looking it over, before asking me something in Finnish, ‘Sorry, I don’t speak Finnish, what was that?’

In perfect English, ‘You haven’t weighed it? Where is the sticker with the price?’

This was not good. Logic had no prevaled, and the only person scanning shopping had a get off their little chair and wander out from behind the register and off into the store to find the scale with the ticket printer. The whole queue was looking at me now.

I did not return to the tiny supermarket in the metro station under the hotel.

Seurasaari is a small island on the east side of Helsinki. I had visited once before in 2013 for the midsummer festival, it was a little different now. I caught a tram from outside the hotel, then changed to a bus that ran along the foreshore on the western side of Helsinki, past where I attend the Rock The Beach festival. The bus ended at Seurasaari and everyone got out.

The bridge over to the island was covered in ice. Even the locals were struggling. I did the cartoon thing of having my feet move and my top half do nothing until I started to fall and grabbed onto the hand rail. I stopped and put my spikes on my boots. No point twisting my ankle again.

While I slowly and carefully walked along the path local joggers flew past. I really have no idea how they do it, I had several layers on, and walking was an effort and more of a shuffle.

I got the end of the island and put my bag down and got my drone out. Finland handles drone laws well. There were clear maps and apps that say where you can fly, and they even have signs up in areas where you can’t. A couple of friendly locals asked about the drone.

I really enjoyed flying the drone out over the frozen bay. It doesn’t look like anything else I had ever seen.

After about one and a half batteries of fly I packed up everything back into the backpack and set off again around the island to make sure I made it back to the bus stop in time. The sun was getting lower in the sky, but it still had longer to set than I thought. The sun behaves strangely this far north. It doesn’t stay up for every long, but the closer it gets to the horizon the slower it moves, twilight seems to last for hours, starting not much past 2PM.

I love Helsinki. I would gladly go back in an instant.

One Reply to “Back in Helsinki”