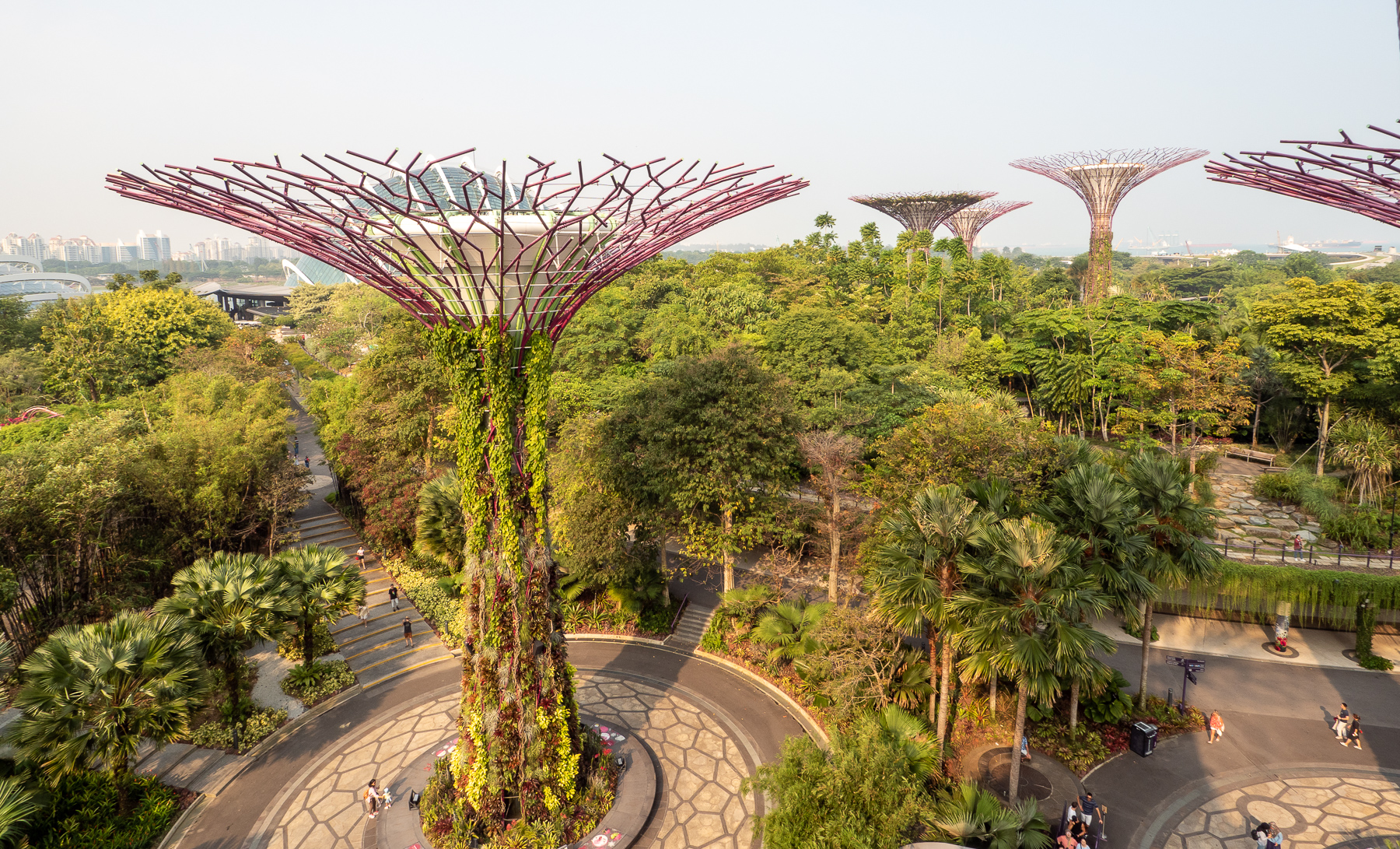 The good thing about the Singapore Grand Prix being run in the evening is that there is no rush to get up and head out first thing in the morning. The most urgent thing before lunch is making sure you get to the hotel breakfast before they stop serving.

It also means when you do eventually head out at a reasonable hour you have time to do tourist things before heading into the Grand Prix.

As the MRT station next to the hotel was still being built, and the buses all got confused when they got near the centre of Singapore we grabbed a Grab (Uber, but not) out to Gardens by the Bay. I had meant to go here earlier in the year but never made it.

The ticket buying process was the usual mix of throwing lots of people at it, and then organising the people efficiently. A queue walker organised the orders and wrote them on a tiny piece of paper in a consistent way that meant the cashiers didn’t need to ask or interpret an order.

First stop was the Cloud Forest. Stepping inside it is immediately refreshing and cool. I tried to convince myself that it was the effect of the waterfall and the plants, and they weren’t just running GIANT air conditioners and pumping in cool air.

After walking around the back of the artificial mountain we found a collection of orchids, and in particular smelly orchids. Everyone took the detour and walked slowly through carefully inspect each one. There were also a number in glass or Perspex boxes with notes on them, declaring them almost extinct in the wild.

When then queued for the elevator to take us up to the next level. I mean what is the point of building a new mountain if you don’t make it accessible from the outset. Must have been a bit easier to construct than when the Swiss go and stick an elevator in an actual mountain.

The second level up had an artificial mountain pond (lake is probably what they were going for, but it wasn’t anywhere near that big, with canoes and things made out of lego.

From here we were also able to walk out above the gardens.

Back safely inside the mountain helpful staff right next to the top of an escalator direct you onto the escalator. Inside there are a collection of geodes and stalagmites. The geodes seemed real enough, but the stalagmites could have been anything. I don’t think the artificial mountain had been around long enough for them to form naturally.

We exited via the gift shop, where they did have handy little signs alerting Australians that customs laws mean that a lot of the things they sold, including orchids in glass would need to be declared when arriving home, as they were technically biological plant matter. We paused for refreshments and just long enough to decide it was still really hot outside and going into the next dome, the Flower Dome was a good idea.

The Flower Dome was even larger than the Cloud Forest. It was cool, but lacked an artificial waterfall. It was broken up into a number of sections with plants from different areas, an arid or desert area, Australian, Mediterranean, South American. Throughout the whole dome there were a collection of animals or fantastical beasts carvings.

I enjoyed walking around the gardens, and taking photos. Everyone was taking photos, but some were taking it more seriously than others.

Again we exited via the giftshop. It took us a moment to realise it was just another entry into the same giftshop as before.

Back outside we headed off the general direction of the super trees. Artificial trees with not artificial plants growing on them, and a lift inside to get up and down. There was a suspended walkway between a few of the trees. There was just enough movement in it to make me want to get to the end sooner rather than later, but the views were fantastic.

Back safely on the ground we found a food court style place, complete with an automatic vending machine thing where you could place your order for any of the restaurants, and allowed you to vaguely wave your phone at it to pay.