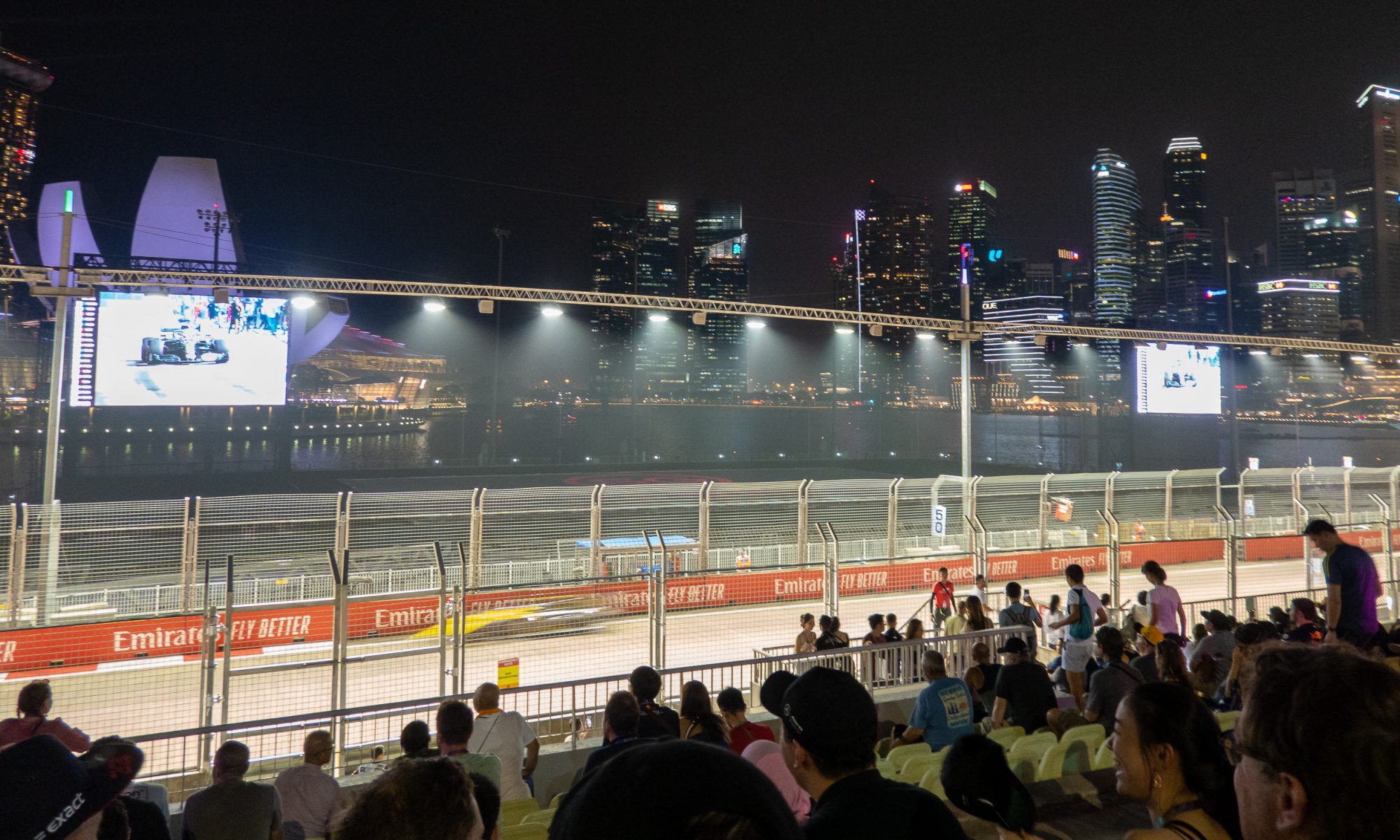 The last time I was in Singapore was just a few months ago, after my 6 weeks in Europe. I had planned to do a few things in Singapore on the way through back to Australia but I ended up spending most of the time in my hotel room after eating a dodgy bread and butter pudding and getting some nasty food poisoning – this trip was much more enjoyable.

Planning for this trip started earlier in the year with a crazy idea to fly to Singapore to see the Formula 1 Grand Prix. I was really looking forward to getting a direct flight from Canberra to Singapore without going via Sydney or Melbourne, but I ended up extending my leave by a week and visiting family in Melbourne first.

When looking around for tickets to the grand prix we quickly found out it was very very expensive to go to the grand prix. I was happy with the idea of going to Singapore, getting a pass to access the grand prix on on the Friday or Saturday and then watching the actual race somewhere else. After a bit of searching we stumbled across a package deal of hotel and grandstand passes for not very much more than the grand prix tickets alone. We jumped on it.

The Formula 1 starts on the Friday before the race on the Sunday. With Singapore being a night race, and broadcast into Europe on Sunday afternoon at the same time as a local race would be, nothing starts much before mid-afternoon. We had breakfast in the hotel before venturing out to pick up local SIM card and public transport tickets from the 7 Eleven.

The hotel was inexplicably not directly opposite an MRT station. It was however directly opposite a new MRT station under construction, and was on several bus routes. We jumped on bus heading vaguely towards the city. I followed it on Google Maps until it started getting slightly lost – the grand prix track in the city had disrupted most of the bus routes in some way – we jumped off the bus near the Singapore River and started heading in the direction of Raffles’ Landing.

As we got closer to the track we could hear cars going around. They weren’t quiet, they also weren’t F1 cars, but the Porches.

We followed the loud noises through the bag checks and the around towards the (over priced) merchandise stands. There were 4 large tents, one for Ferrari, one for Mercedes, one for Daniel Ricciardo and Max Verstappen who used to be on the same team, but aren’t any more, and one ‘other.’ It looked like the merchandise people didn’t want to or couldn’t afford to have a tent dedicated to Red Bull and Renault, and just updated Dan’s uniform on the picture.

Next stop was the over priced food and drink stands, of which a large number didn’t take card, cash only! Conveniently there was an over priced ATM nearby and I got some more cash out. It was already getting very hot, or had been very hot for a while and I was just starting to notice. After recharging with water and food we consulted the paper maps we had been given after security, cross referenced that with the maps on phones, compared that with the temporary signs, and checked the direction of the wind before trekking off to find our grandstand.

The race prescient was separated into a number of different zones, with different passes granting access to different zones. We were checking out the other passes and were trying to workout where our passes were in the hierarchy. Eventually we made it to a zone gate, where we were let through to a slightly more exclusive area with a few thousand other people and the grandstand. We decided our passes and zone access was upper middle great unwashed masses.

The seats, while not overly comfortable, were pretty good. We had a good view of the bay straight, just before the left hand corner at the end. There was a giant TV opposite that meant we could always see what was going on in the race, not just for the 20-30 seconds of cars passing each lap.

We watched the first free practice session, and I started trying to get some photos of the cars. With the safety fence, and the gate, it was clear I needed to start trying to get the cars by panning with them and a slower shutter speed to blur out as much of the fence as I could.

After watching the cars go by a few times there were a few things I noticed that don’t come through on the TV.

After Free Practice 1 (FP1) there was a few hours before the evening session and FP2, I was starting to feel the heat after sitting in the sun for a while, so I recommended we head back to the hotel for some air conditioning and a nap.