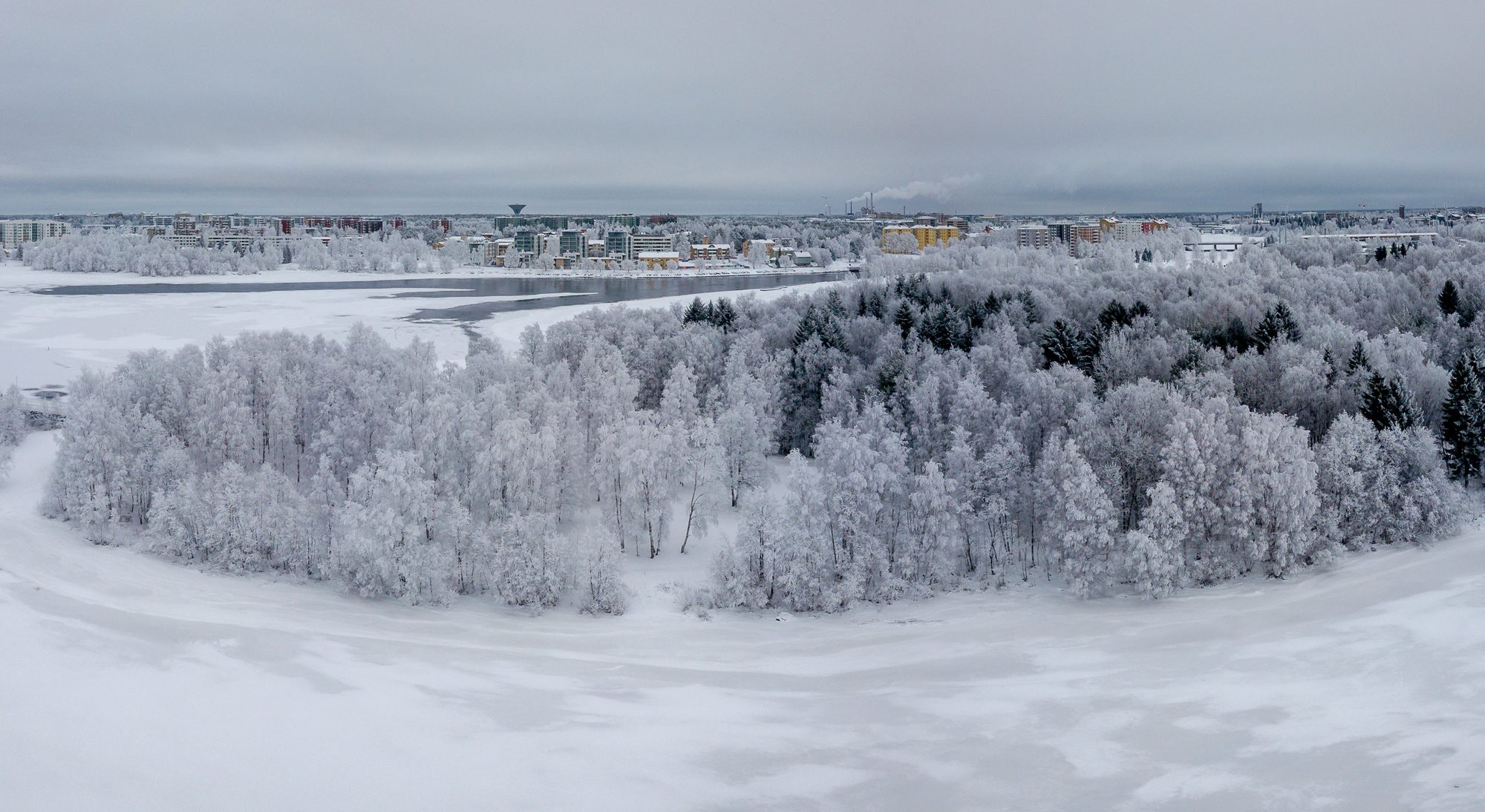 Oulu, I still have no idea how to pronounce it, is an interesting place. A colleague at work who had spent some time in Finland would keep correcting me.

The easiest way to get around Finland in winter is to fly. Unlike more southern airports, Finnish airports don’t close if there is snow, like everything else the infrastructure is built to handle it. I had a short flight from Helsinki to Oulu, and probably spent more time in the taxi and waiting at the gate that I did actually in the air.

I found a taxi at the airport who took me to my hotel. The airport is just outside the city, but it seemed like we were driving on local side streets, with roundabouts and no traffic lights. Unlike in the south (Helsinki. Anyone outside Helsinki thinks Helsinki is the south, like Tormand telling Jon he is a southerner. The roads were all covered in snow and ice. In the town graders were putting grit down, but they just accept there was going to snow on the roads for winter and deal with it. It isn’t possible to remove all the snow – it never melts in winter.

On the first evening I ventured slowly about one block into the town, decided it was unbelievably cold and I should just eat in the hotel tonight. Walking back to the hotel there was suddenly a giant glowing blue building that wasn’t there before. It looked like something out of Half Life and I expected a giant walker to come through the mist.

That evening I enjoyed reindeer in the restaurant in hotel. Last time I had it was in Finland. It was delicious.

After breakfast, complete with iPad-enabled juice I went for a walk in the snow. The hotel was next to the mouth of the Oulujoki River and a number of small islands, all connected with bridges.

Later on I ventured further into town and managed to find a camera store, or a warehouse full of photographic gear that happened to also happened to have somewhere to pay for the items – they mostly did online sales.

I had managed to not pack a lens rocket blower puffer thing, and wanted to make sure my camera gear was all clean for my first night of aurora photography. I made sure I had enough euros with me but when I asked about paying they explained they didn’t accept cash, and laughed at me. Finland isn’t Sweden, but you can easily travel around with zero cash here.

The rest of the day was spent enjoying pancakes for lunch and getting my camera gear ready for the evening. I messaged Thomas asking what time pickup would be, it wouldn’t be until 9PM at the earliest.

A few days later, after two nights of photography, I had a full day in Oulu before my flight back to Helsinki. It had snowed the night before and was completely still outside. All the trees were covered in snow, it was the proverbial winter wonderland. I packed my drone into my backpack and my camera gear and set out to explore the archipelago.

While wandering through the trees, completely covered in beanie, and a scarf over my face to stop my lungs from freezing a local waved at me and said something in Finnish. I took the scarf from my face and apologised for not speaking Finnish.

“It is so lovely out here today with the snow on the trees! I’m just happy to see someone taking photos.”

After the night photography I still had a couple of days in Oulu before my flight back south. I had been into town most days from the hotel and found somewhere that did better than just good coffee. They had quiet little booths to sit in, so I wandered into town slow, being careful not to slip on the ice, while the locals hurried past me as sure-footed as ever.

On my last evening in Oulu I had managed to get tickets to the hockey (also known as ice hockey). The local team, the Kärpät (closest translation is a stoat) were playing the KooKoo from Kouvola in the south. I got a taxi to the arena, seemed the easiest way to get there considering it was cold and I wasn’t entirely sure where it was.

The level of play was unsurprisingly high, but the game did get a bit scrappy at times. The local team got a couple of soft calls from the referees, and the visitors seemed to get couple of tough calls against them. The Oulu team won 5-1 – game highlights on YouTube.

I really enjoyed my stay in Oulu. If I head back there again I’d consider getting a car for a couple of days to head to some of the places just outside Oulu I couldn’t easily get to on a local bus.

One Reply to “Oulu – A winter wonderland”