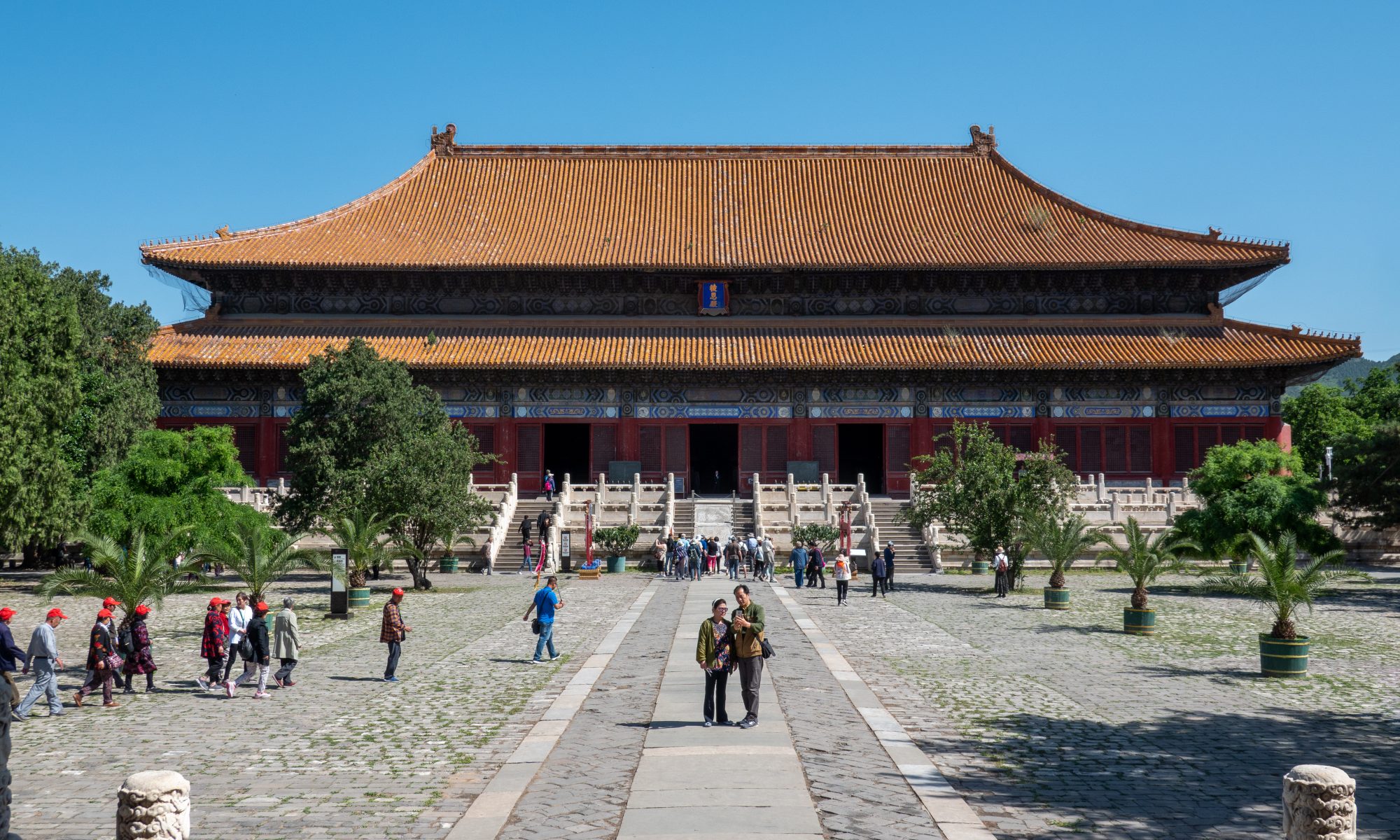 I studied Chinese in high school, all the way to year 12, though I barely remember any now. I’ve eaten with chopsticks since I was a kid. I just remember chopsticks being in the cutlery drawer with everything else, like the little cake forks you use to eat cake. They’ve always just been there.

I’ve been to Hong Kong a few times, either as a 3 or 4 day stop over going to or from somewhere else, or for around a week with the school band, I played the bass clarinet. But I had never made it to mainland China.

Dad had been interested in going for years. Dad convinced mum to go by organising the trip through an agent with dedicated guides and drivers each day to take us around.

This was a very good idea.

It had made getting into places very quick and easy. The guides knew about the places we visited and usually had all our tickets long before we arrived. Our itinerary was still what we wanted to see, dad took his time finding all the places we wanted to visit. The guide in Xi’an commented that while she takes people to the Terracotta Warriors several times a week she only took tourists to Famen Temple once or twice a year, maybe.

The food had been great. The best meal I think we have was after visiting the Great Wall*. Our guide took us away from the tourist village around the Great Wall to a restaurant just 5 minutes down the road.

He ordered for us and then went and ate with the driver, and other guides. Eggplant, lamb, veggies, pork. It was fantastic. There were other western tourist in the place, but they were all accompanied by a guide in a private car like us.

Whenever we start eating our guides are always surprised we are competent with chopsticks. I was the undefeated Year 10 picking-marbles-off-a-plate-and-putting-them-in-a-bowl champion in Chinese class. But none of this matters if we don’t have an chopsticks to eat with.

In Pingyao we arrived very late after catching a train from Jinan. We were met at the station by our guide and driver, and taken to the hotel, right in the middle of the old town. Pingyao is an ancient city, and there isn’t a lot of opportunity to expand or build inside the old town. The hotel had a restaurant on the other side of the street from where the rooms were. It was a brand new place they hadn’t actually opened yet, but we were invited to try it on our first night.

I ordered the beef. The chef had a giant pot on the stove and a ball of dough the size of a small basketball ball. The dough was grated directly into the pot. Grated. Moments later all of our dishes were ready. Before we could get into them the staff came over to explain how to eat noodles in a bowl. We had to mix the noodles and meat around and get the meat to the bottom of the dish before we could start.

The worst meal (worst being relative statement, not an absolute statement) was easily one near the Terracotta Warriors, outside Xi’an. This was the most touristy area we had been to the whole trip. We saw more westerners in 5 minutes there than in the rest of China. The restaurant was a bit of a tourist trap.

Foreigners were taken to ‘special’ tables where we were asked to pick different teas to try, with the offer to buy packs of loose leaf tea if we liked it. They didn’t seem to understand that we would never been able to take the tea back with us through customs (a handy excuse when people try to sell you anything made of wood, or food), and that we didn’t actually want any.

They brought out two of the dishes the guide had helped order, but stopped there. No rice, no bowls, no chopsticks. We sat, waiting patiently. Eventually we gave up and asked for bowls and chopsticks. This then seemed to then immediately be forgotten by the staff until the guide arrived and asked how it was going. It was not going well. She was on it, and started demanding things be brought to the table. The food was fine, if laced with MSG.

Xi’an was a bit of a tourist trap. There was a souvenir store just outside the entry to the Terracotta Warriors park, we were ushered inside and told we were very lucky because the farmer who dug the well to find the statues was here today! We could buy a book, get it signed, and have a photo with him!

To be honest he didn’t look 86, and given that Yang Zhifa had retired from his job at the museum years ago we were a little skeptical. We didn’t buy any books, or take any photographs. Mum did ask how much a magnet was, but the price was way too high. Generally I think we did well not to get caught up in too many of these, and I put that down to dad’s preparation and clear instructions for the tour.

Shop and a Show

In Xi’an we were offered the chance to see a dance show with costumes and dances going back to Tang Dynasty. We arrived well on time and were given our seats at a little table. We ordered tea, and were then presented with an assortment of gifts and souvenirs to purchase for a special low price of a few hundred yuan for EVERYTHING. Including a flying minion.

The waitress looking after our table carefully unpacked them all onto the table and then walked away to let us think about it. On her return she announced the manager had approved a very special 50% discount! We politely declined. She said “I’m sorry, it is just my job, I have to.” And packed everything away again for the next group.

The show was quite good. It started slowly, with what I would describe as ‘walking around a stage waving arms with costumes on,’ but each dance got more choreographed and extravagant as the night went on.

It is hard to describe the shopping centres here, other than huge. The shrines to consumerism are everywhere.

There is an awful lot of money in China, an awful lot, I’m just not sure how evenly it is distributed.

A shopping centre in China without at least two boutique Swiss watch brands you don’t know is barely worth mentioning. The places are just full of brands I don’t know and can’t afford. While there are people in them, they often seemed very empty. Restaurants are always full, but boutique clothing stores aren’t.

We managed to find an actual supermarket in one of the shopping centres that had a great range of pre-packed food we could snack on in trains. The store was part of a chain but even they only took Union Pay, WeChat Pay, or cash. No Visa, MasterCard.

Most cities we went to had at least one Apple flagship store, and they were always busy. Apple products are very similarly priced in China to the rest of the world. While Huawei, Oppo, and Xioami have high end phones it is their cheaper ones that own the market here. WeChat and AliPay don’t need NFC or anything fancy to work, just a camera for QR codes.

It wasn’t just the giant shopping centres everywhere, with varying levels of customers, there were little shops in basically every tourist location, and inside all the temples. They weren’t just selling incense to burn, they would sell anything they thought they could get away with.

Some places are much more organised, and instead of setting up a few tables inside the temple, they just build a series of shops in the grounds when they built the place. Famen Temple was a good example of that. While there was an old(ish) Pagoda (recently restored), the majority of the temple complex was new, and they took the opportunity to build in the shops.

After our visit to the Famen Temple complex you are directed to exit via the gift shops, plural. They hadn’t actually been built yet for the most part. There were a few that were open right at the start, but most were completely empty, or still being built. The way out must have been nearly 1 km long, if not longer. The corridor snaked around and back on itself a few times.

I had the impression that while the construction was ongoing, they had actually finished ages ago and what was left would never be done.

There is a lot of money in China, but there is a lot less cash floating around. We were told we would have to use cash most places, including tips for our drivers and guides, and only large hotels would take Visa or MasterCard. This has turned out to be very true.

The biggest payment methods now are WeChat and Alipay. Everyone has a smartphone, and everyone uses WeChat, AliPay, or both. Street vendors have QR codes to scan, a beggar waved a QR code at my in a train station. While this mobile payment platforms are taking over, the place hasn’t gone anti-cash like Sweden, where the VAST majority of stores advertise as not taking cash at all, but they do take debit and credit cards no worries.

Foreigners are all but locked out of WeChat and Alipay. There are websites that claim they will tell you how to set up Alipay or WeChat pay as a foreigner, but they are mostly lies, just saying that for the clicks from Google and the ad revenue on their page.

There is a single way I know to get WeChat pay working but it requires a Windows computer and a WeChat Pay user in China willing to activate your account, and to send you money.

In Europe most countries had their flavour of a mobile payment system based on QR codes, and like China foreigners are basically locked out of them, requiring a government issued ID card, and a local bank account. The difference being Europe takes credit / debit cards everywhere, and Google Pay / Apple Pay also without issue.

These payment systems didn’t exist that long ago, and PayPal has been around for much, much longer. PayPal must be furious they never managed to become the defacto mobile payment system, and that they remain largely an online solution.

Arriving in Hong Kong it was great to see contactless payments were everywhere and I could vaguely wave my phone to pay for things. The only caveat is that you need to let them know you are paying with ‘visa’ otherwise they assume you are using your Octopus (train ticket).