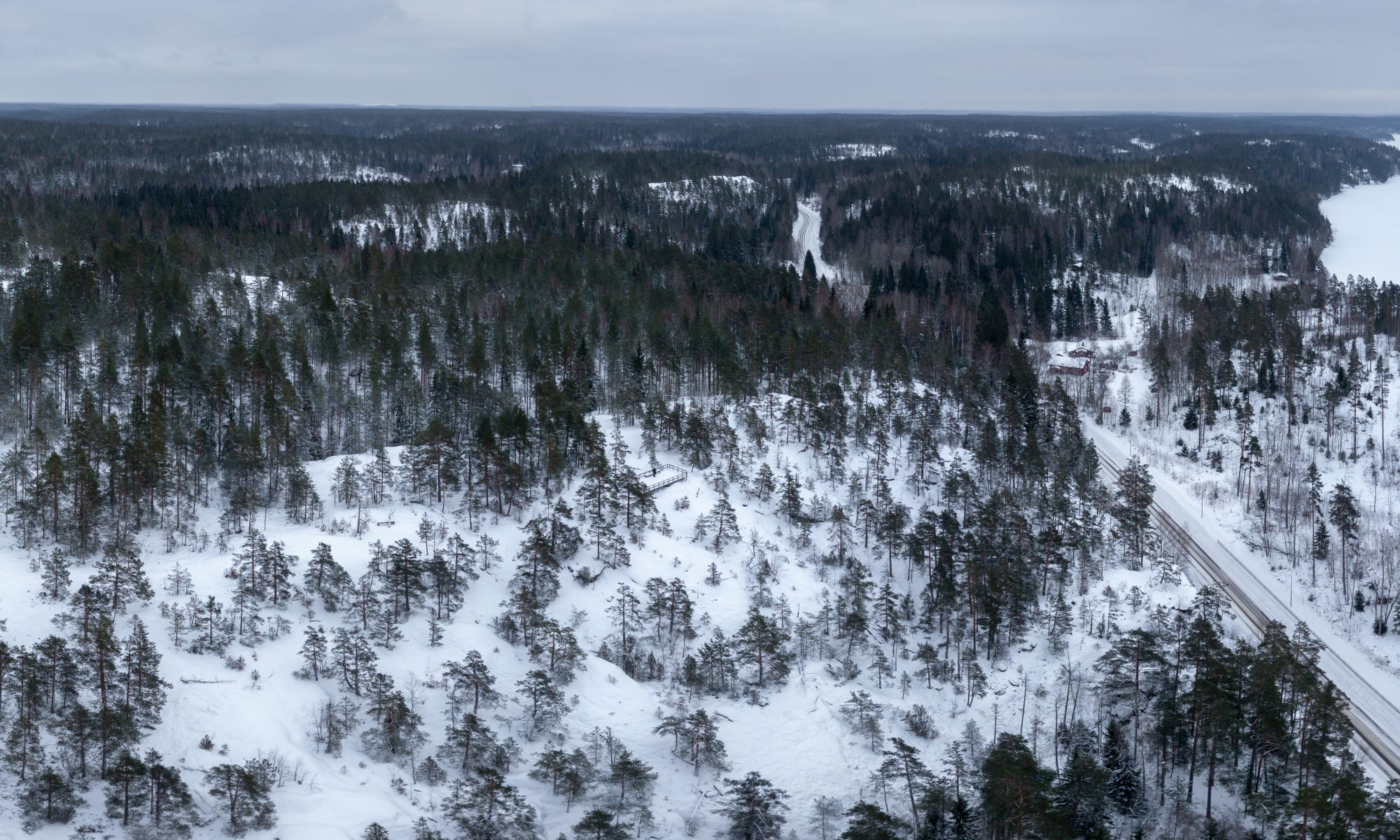 After spending a couple of days in Helsinki I figured I had rested my ankle enough, and I wanted to head a little way out of the city. I installed the local Helsinki public transport app on my phone, and asked Google Maps for directions. Nuuksio (which I still have no idea how it is pronounced) was two busses away. I knew I didn’t want to be trying to get back to Helsinki in the dark, so I set out quite early in the morning, in the dark.

The hotel was next to the a shopping centre and bus interchange. After getting a ‘flat white’ coffee from Starbucks, because they were open, I started walking around trying to find platform 35, before working out there were two levels to the bus interchange and the buses that looked a lot like coaches and headed out of town were on the other level.

I did a lap with my coffee before I worked out where I was supposed to wait. The bus out of town was a coach, one door at the front and seats for everyone. There wasn’t any danger of needing to stand for the trip, no one else seemed to be interested in a day trip to Nuuksio in the middle of winter starting around 8AM.

I showed the driver the ticket I had bought on my phone who told me to swipe the ticket over to a QR code for his ticket machine to scan and beep. The first leg took my out past the airport to the north.

I followed the bus along the freeway on my phone, watching the stops go past before my phone buzzed and told me to get off at the next one. I wasn’t the only one to get off the bus, but I was the only one getting on another bus, everyone else seemed to disappear off to Ikea for breakfast.

The next bus was a local bus, two doors, lots of standing room. I showed the driver the QR code to scan who then told me to swipe back to the human readable ticket so he could see it.

The local bus dropped me next to the visitors centre. An enterprising Finn has set up a couple of tents next to the car park selling coffee and snacks.

I headed over to the visitors centre, and started climbing up Pohjannaula Tower. The ancient Finns believed the sky was held up by a pillar connected to the north celestial pole, Pohjannaula. Which we all now know as the north star.

At the top of the tower there was map of the constellations on the roof, and a small representation of the solar system, the type of thing primary school-aged kids would be dragged up to look at by a teacher on an excursion.

Inside the visitors centre they invite you to remove spiked shoes and replace them with warm woollen socks.

Inside the visitors centre I managed to get a map where they marked a lookout on the hill behind where you could see across the frozen lake. My ankle wasn’t feeling too bad, and I was comfortable walking slowly, pausing regularly to take photos on the way, so I headed off slowly.

Walking in a winter wonderland

The easy path started just opposite the visitors centre. It slowly climbed around towards a soccer field, and what I think is a sports school. No matter how many trees covered in snow I saw in the whole trip, I never tired of it.

Near the top I stopped when I heard something very odd. I was looking around trying to work out what it was. A woodpecker had taken a liking to a power pole and was busy trying to get inside.

At the top of the walk there was a snow covered lookout. I put my bag down, started getting some photos, and started setting up the drone.

I spent at least 20 minutes at the lookout, went through both of my drone batteries, flying back and forth trying to get smooth transitions and the right exposure.

While I had specifically purchased a new small Sony RX100 VI for this trip, I still carried my full frame DSLR with my on days like this, along with the drone. By the end of the trip I still couldn’t settle on my favourite walk around lens. Each time I changes my lens for a photo that I couldn’t get with another I’d change my mind. My favourite seemed to be whatever was on my camera at the time.

The Irix 15mm. Fast, wide, a stop at infinite focus that was accurate. It’s an amazing piece of kit, and I never would have been able to get the photos of the aurora I did without it.

The Pentax 100mm f2.8 macro. I ordered this a little while before the trip, and never intended to bring it with me, but when I got it I couldn’t not take it. It is a lot smaller than I thought it would be, surprisingly light, and weather sealed. I did not regret taking it with me.

The last of the trio of favourites is the Pentax 43mm f1.9 Limited. I got this second hand from Gumtree. It is really tiny, and almost looks comically small on the front of the K-1.

I got back to the visitors centre. There were a few more people milling around now, having coffees and warming themselves in the tent with a fire. I handed back map i borrowed and got some postcards.

I didn’t spend too long back in the visitors centre, I wanted to make sure I got a bus back towards Helsinki before it got too late, and the local bus didn’t run all that often.

The local bus got me back near the giant Ikea. I managed to cross the road and found the bus stop on the side of the highway going back into the city. The sun was out, but heading down, and it was cold. Very cold. A few locals joined me wearing jeans and jumpers. They didn’t even seem to acknowledge it was 10 or 15 degrees below zero.

After 20 minutes or so we were all not sure if the bus was even going to come. We would each venture out of the relative shelter from the wind to peer down the road to see if we could spot the bus coming down the highway. By the time I got back to the hotel it was starting to get dark. The next day I was off to Oulu, and I needed to pack.

One Reply to “Nuuksio – Finland”