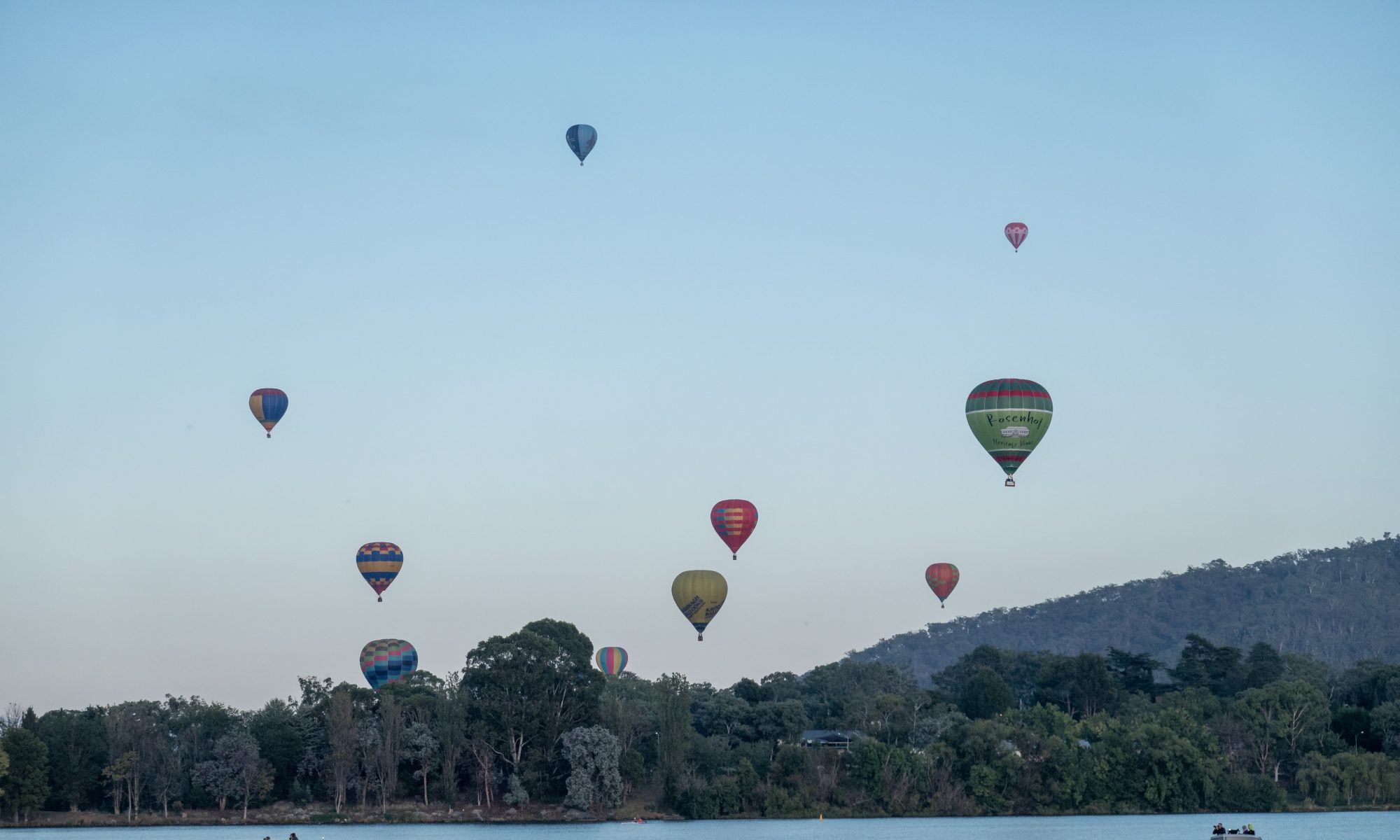 I had a busy weekend last weekend, my parents were visiting from Melbourne. They chose a good weekend for it. It was the Canberra Day long weekend, so we had Enlighten and the Balloon Spectacular to keep us busy. I’m not good at organising activities when my parents visit, spending most of my downtime in front of a TV.

The first event we all went to was Enlighten, and the Night Noodle Market. Canberrans are very experienced at lining up for overpriced food from temporary food vans parked on the grass.

The best display is always Questacon, probably because it is a giant white screen that makes it easy to project onto. This year it was celebrating 50 years since the moon landing and the part Honeysuckle Creek (and Parkes) near Canberra played in receiving the broadcast.

Possibly foolishly, the morning after Enlighten we all trekked back into the city just after sunrise to watch the balloons.

I don’t usually take many photos of people, unless they are on a stage and dancing around at The Basement. I do take photos of my friends each year when they put up their Christmas tree, it has become a nice tradition, and some more formal ones of their family every so often (twice, I’ve done it twice).

But I hadn’t really done any portraiture.

A friend asked for a series of photos for them to use on their website for a business they are building. Given that I really didn’t do terribly much different to usual, point camera, push shutter, hope, repeat, I was actually really pleased with how they turned out. Managed to get around 200 keepers, and 25 really good ones over the course of the afternoon.

On the Monday Dad wanted to fly his drone. We agreed a two hour drive to a national park in NSW was probably too far, so we headed to Googong Foreshore. We walked around the edge of the dam, before stopping under some trees.

I’ve caught up with John Oliver, and the Wednesday-night-ABC-TV-night shows after falling behind.

The most recent episode of Get Krack!n was brilliant, disturbing, and unsettling. Seeing Harry Sorry David Potter from Rake take his penis out on TV was unexpected. Just trust me, it was totally within the context of the show, and you should watch it.

On the strong recommendation of several work colleagues I am also making my way through the F1 documentary series on Netflix. It is excellent, and they do a good job of getting me excited about races that I already know how it ends.

Now I am working in Civic, and catching the bus to work I am not sure how I am going to go watching the F1 this year. I am going to be asleep before the races begin. But, looking at qualifying in Melbourne I’m not too cut up about it. Looks like the Mercs will take it unless their engines blow up.

7 Days Out. Homework for a podcast. A short documentary series that looks at the last 7 days before a big event. I’ve watch the reopening of 11 Madison Park, looking at the best restaurant in the world opening after renovation, and the last 7 days of the Cassini mission, before the spacecraft was crashed into the atmosphere of Saturn.

I fully admit to being an unabashed NASA fanboi, but the Cassini episode was fantastic. It was amazing watching the scientist asking for just 1 more minute of data before the single was lost. Well produced artists’ impressions didn’t hurt.

It was absolutely fascinating to listening to Julie Webster talk about how the orbiter was engineered, and how they would sit inside it to get a feel for how it would respond to different forces.

A friend had an extra ticket to see Tim Minchin at the Canberra Theater, and I was lucky enough to go. While it would be easy to dismiss Tim Minchin as a comedian who writes hilarious songs, but he is also just an outright fantastic musician. The show was brilliant (if loud, but I guess it was a concert).