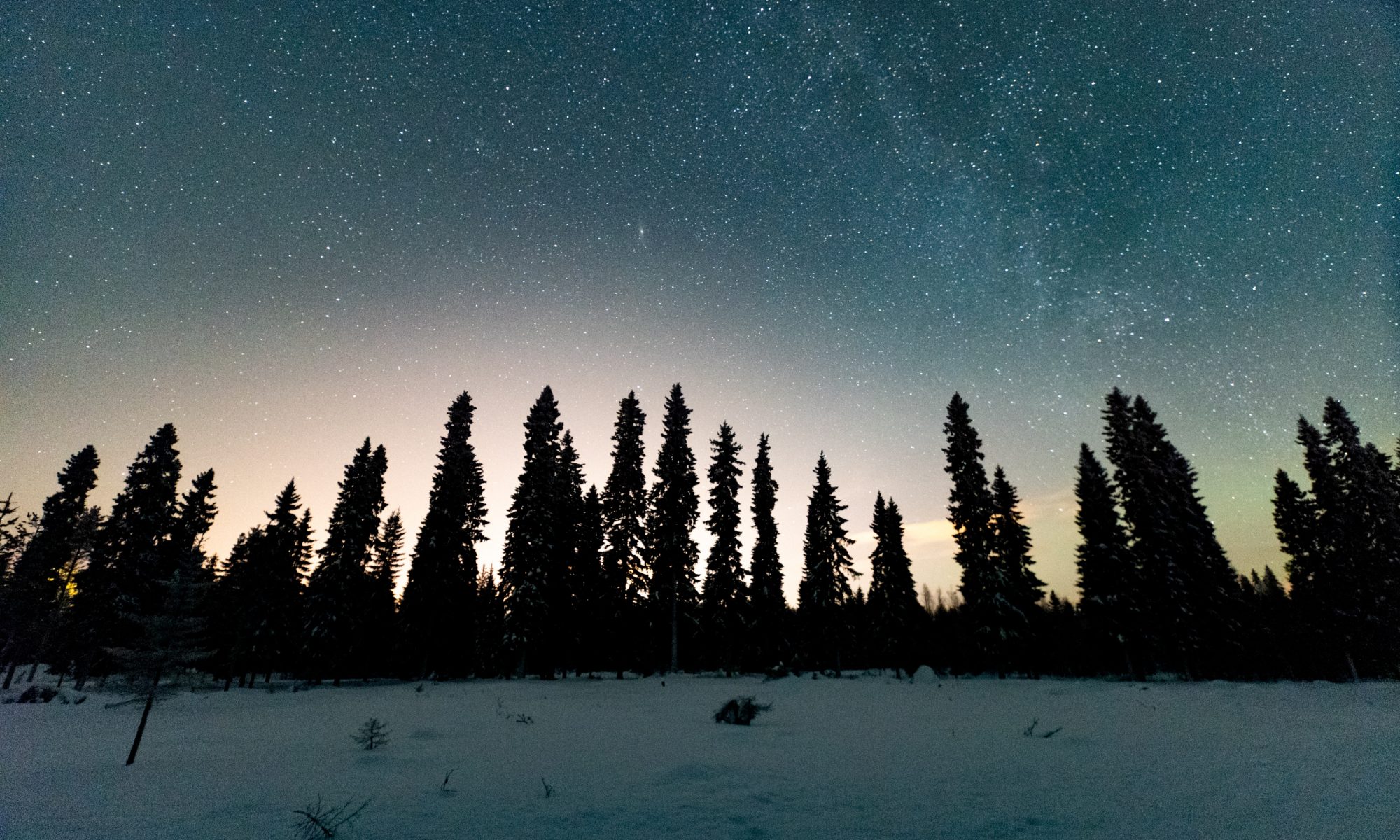 Day 2 was a little different to day 1. The weather was not on our side. Thomas didn’t want to head out until later in the evening to maximise the chances of seeing something. He met me at the hotel around 9:30 and we set off north. The biggest challenge tonight was to find clear skies, and to find them we were driving north.

The previous evening Thomas has mentioned that the weather wouldn’t be great today, and had offered to take me to see some other things we don’t have in Australia, like the frozen sea. I had agreed that sounded like a great idea. I had never seen the frozen sea before. The last time I was this far north it had been midsummer. Finland is quite a bit different in he middle of winter, and I was enjoying the contrast.

After about 45-50min of driving north along the coast we stopped at a camping site that had a number of cabins. We traipsed through the knee-deep snow, after a few minutes Thomas said we should stop. He pointed out where the shore line was, well behind us.

I took a few photos, Thomas took one of me as well, before we headed back to the car, pausing for me to get a photo of the campsite playground covered in snow and ice.

We kept driving north, all the time looking out of the van, and up, trying to spot any stars. Thomas kept an eye on the thermometer. The colder it got, the clearer the skies would be. It was down to around -9 or -10. We drove past a nondescript sign on the side of the road and entered Lapland.

After the previous night I had prepared slightly more for the cold. Two pairs of socks, two jumpers, two beanies. I also got these tow warmers from a sports store in the morning. You open the packet, crunch them up a bit to start the chemical reaction, wave them about in the air for 15min or so, them stick them to the tops of your socks. They were covered in warnings not to stick them directly on your skin.

Thomas also gave me a hood with a faux fur trim. I was slightly skeptical at first, it wasn’t as think as my two beanies. But, materials matter, and animal skin and fur (even just around the trim) made a huge difference. It kept my face warm like I was wearing a scarf (which I also had two of on). He also gave me some big mittens to keep my hands warm. I had to take them off to change settings on the camera, of course.

We turned off the main road and headed inland. The temperature outside was now around -15. We could see a few starts outside, and the clouds were lifting. In the middle of nowhere we pulled over to the side of the road. There was a row of trees and a small clearing. It seemed like a good a spot to take some photos as anywhere else. I jumped out and Thomas put the van as far into the snow bank has he felt comfortable doing. There was more than enough room for a car to pass us, and who was going to drive down this tiny road in the middle of nowhere at 11PM at night.

I set up my tripod off one side of the road and started lining up some shots. Thomas looked north, trying to see if there was any aurora activity.

“That sounds like a truck coming?”
The lights came around the corner, slowly at least.

A huge, fully laden logging truck. Thomas got off the road as best he could next to the van. I jumped off the other side holding my tripod and camera for balance in thigh-deep snow, which didn’t look like thigh-deep snow before I got into it.

The truck had slowed right down to try and squeeze past the van, barely rolling along. The driver turned on several lights down the side of the trailer so they could see where they were with the edge of the road, and the van.

After a couple of minutes they had past us and were able to find second gear and continue on their way. Thomas and I agreed to get back in the car, and find somewhere better to park. About 3km down the road we found another clearing, this time with a skidoo track or something we could put the van in, and get it off the road.

We both jumped out and set up the tripods. Thomas could see a tiny bit of green right on the horizon. I set up the astrotracer feature on my camera to create a time-lapse movie of the stars. There were no clouds, and it was -20. Thomas was right, as the temperature dropped, the skies had cleared. We had a good view of Polaris, the north star. After setting up my camera I went back to the van to grab my little Sony, and the Gorilla pod. There wasn’t much to do while the Pentax did its thing. Thomas asked if I minded if he got back in the van, -20 is no joke, and even locals would rather be in a warm car with a heater running.

I took a few photos with my Sony, painting the trees in light from a torch, then I couldn’t feel my fingers anymore and thought it was a good time to also get in the van, while the Pentax kept taking photos. My toe warmers were still working, but even with two pairs of everything on it was still freezing.

It was nearly 1AM, and we agreed there wasn’t going to be much more aurora activity. There were some low clouds sneaking in from the south. I jumped out of the van to grab my Pentax and stop the recording. I had managed to leave it running long enough to get at leat 20 or so seconds of smooth video of the stars moving across the night sky. There was even some hints of green on the horizon.

Thomas was a little concerned we hadn’t seen too much activity, other than a logging truck, but I was happy. I had stood on the frozen sea, and had a wonderful time getting photos of the stars and the sky.