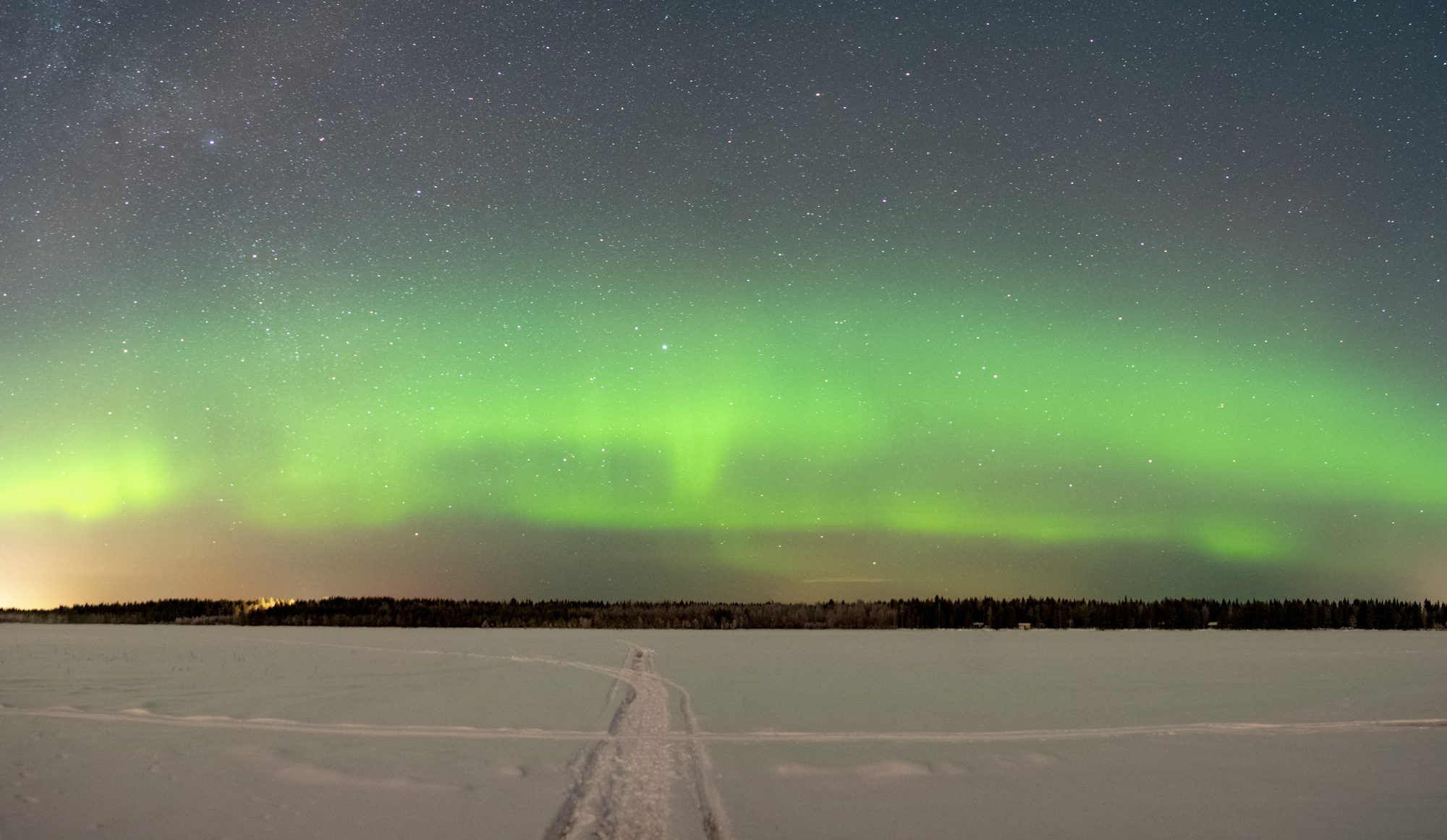 One of the things I was most eager for on this trip was a chance to see the aurora borealis, or the northern lights. There are also the aurora australis or southern lights that occasionally pop up in the south of Tasmania, but due to geography and physics, they aren’t nearly as strong or prevalent.

When booking the holiday I looked around to find a guide to take me out to hunt the aurora. There were some options for self supported cabins in the far north of Finland, but that seemed a bit much. I found a guide, Thomas, who operated out of a town called Oulu, about halfway up Finland on the coast, that seemed to be a good compromise. I booked two nights, the theory being if we don’t have good weather on one of the nights I would get a second chance the next day.

Thomas met me at the hotel with his van and we set off out of town, making a brief stop for essential sausages on the way. Thomas thought there was a pretty good chance of seeing something tonight, as long as the clouds held off. We drove about 30km out of town to a lake in the forest.

Thomas stopped by the side of the road, looking for a skidoo track for us to walk the rest of the way. Our headlamps caught the the snow and ice crystals in the air, everything glistened.

We got to a hut and then headed out onto the ice and snow. Thomas pointed out a bench covered in snow, that is on a pontoon, it’s floating on the water. In summer people jump off it into the water. We walked past it, further out onto the lake.

I set up my tripod and my camera, and started taking some snaps of the sky, mainly just to get the framing and a rough guide of the exposure. It was too dark to see anything through the viewfinder, so taking a photo, checking it, and moving was the best bet.

There was a soft orange glow on the horizon. Lights from a town reflecting off the low clouds, but above that was clear night sky.

After somewhere between 40min and an hour I decided my toes were very cold, as was the rest of me, but my toes in particular. While my clothing was very appropriate for walking around town, and even marching through some snow at Nuuksio National Park, standing on a frozen lake for an extended period seemed to suck the warmth right out of me.

I retired to the little hut on the side of the lake where Thomas was starting a fire. Just getting my feat off the frozen ground helped enormously, the fire, a sausage, and some tea warmed me right up.

Thomas went back out onto the lake. He kept checking his website with the atmospheric conditions. There was a good amount of solar wind, but the polarity from the earth’s magnetic field was all wrong. It was predicted to change in a short while, so he was very hopeful of seeing some activity.

I sat at the fire enjoying my sausage and defrosting my fingers when there was a call from the lake. It was starting. The faint green glow on the horizon was moving. I grabbed my tripod with camera still attached and ran (plodded as quickly as possible in knee deep snow) down to the lake. Sure enough, I could see it.

The green glow had grown and was now quite bright. I started taking photos, just randomly pointing the camera in the direction of the green. The longer exposures really started to show quite a lot of green. After a few minutes shapes and lines started to form, much stronger than just a glow. I changed lenses a couple of times, but kept returning to my 15mm. It was perfect for the aurora, with a click in the focus wheel at infinity, that was accurate, and a fast 2.4 aperture.

Ice was forming on the lens hood, and the tripod and the camera. We kept checking our front elements to see if there was any ice on the actual glass.

Thomas asked if I wanted my photo taken. A couple of false starts and I got Thomas to stand out in front of the camera for me to check the focus, before we swapped places.

We spent another 30 or 40min out on the ice taking photos. The clouds started to drift in from the south and after the lights had finished for the evening we called it a day. It was late, and I was cold, but very happy.

One Reply to “Chasing Aurora”