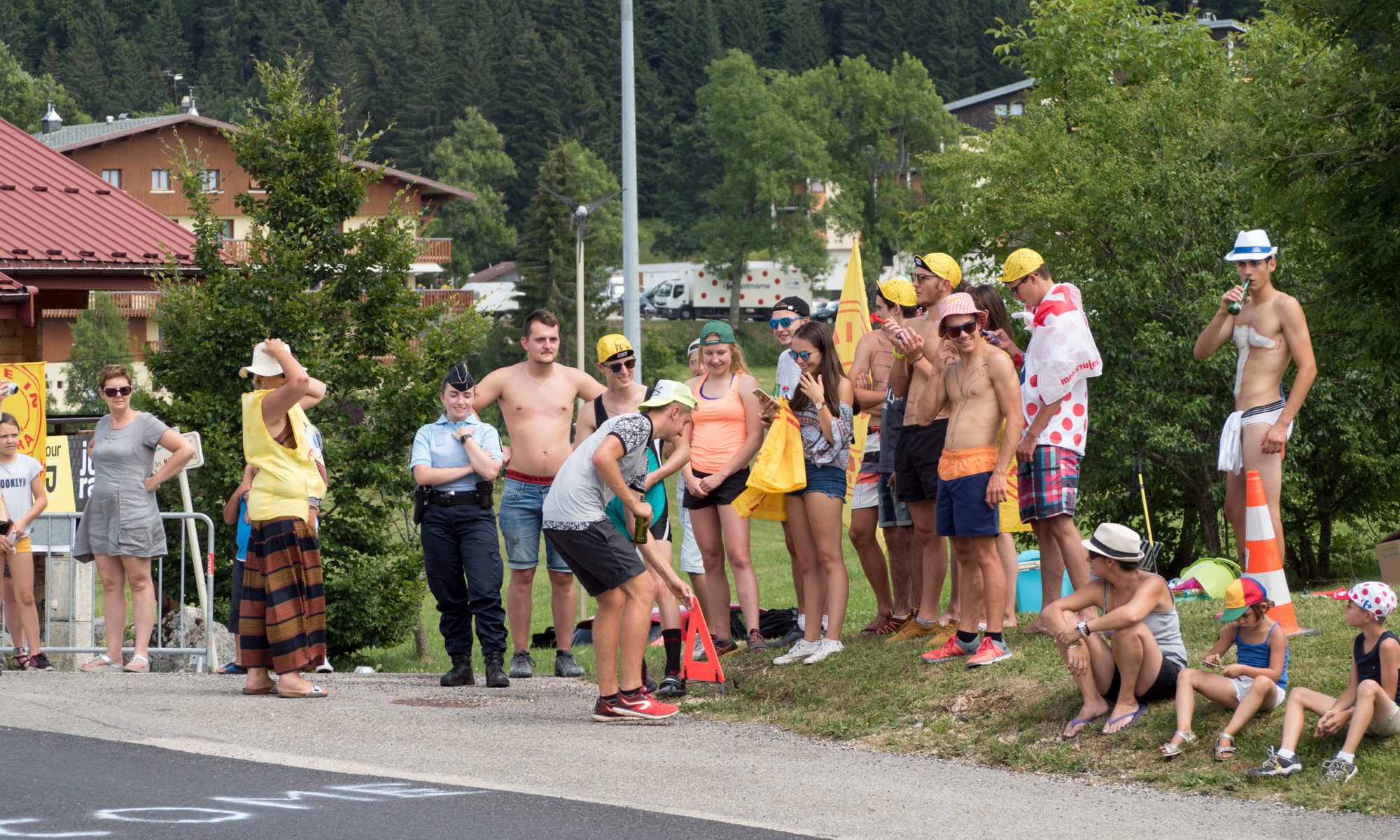 A couple of years ago I was fortunate to be in the same country as The Tour de France at the same time. We were in Belgium, staying a short train ride away from where the race would wind through a small town and up a decent hill. The plan then was to catch a train and walk up the hill.

That day didn’t go exactly to plan, with the race being neutralised after a number of crashes.

The plan this year was to rent a car from Lausanne and just pop over the border into France and see the race not too far from the end of the stage. That was about all the planning I did.

In the morning dad and I caught a trolley bus up the hill towards the car rental place. We found the car, and Bob, a colleague of dad’s who was also at the conference in Lausanne.

Our first stop of the day out of Lausanne was Nyon, where dad thought there could be some Roman ruins. We parked the car in what was a parking spot next to a couple of other cars and walked down to the museum.

The museum wasn’t huge, but had a few pieces from the Roman era found in the area and a wonderful practical demonstration of an aqueduct vs pipes. If you have sealed pipes, you can avoid building aqueducts over valleys, and just make water flow uphill with a syphon. I spent far too long watching the water follow down and up again.

After the museum we stopped for a coffee before heading off to find some Roman columns, which we also managed to find.

Getting back to the car I found a parking ticket under the windscreen wiper. We looked around at a few of the signs, at the other cars parked in the same area. We tried to translate a few of the things, but decided to just drive on, and deal with it later.

We followed the directions from my phone until we ran into some roadworks, and did a couple of laps of a roundabout before heading off in a slightly different direction. Navigation repeated its instructions to ‘take the second exit’ through approximately 17 roundabouts until we hit the switchbacks and climbs up into the hills towards France, and the first of many cyclist who were heading off in the same direction we were.

We made it to the border, which as standard was bereft of any officers. We rolled through and I made what I think was a slightly dodgy left-hand turn / u-turn. A few kilometres down the road we hit the first road closures of the day. We had planned to get through the finish town and head further down the course on a road that ran parallel, but weren’t able to join that road. Not having a plan A, it wasn’t possible to move to plan B, and so I followed up nose and we head off toward another town we knew was on the race route, but had a couple of roads that we could use to get to it.

On the way we found a tiny village, Prémanon, that was basically empty of people, it appeared to be a ski village, but there isn’t much snow around in summer. The patisserie was closed for lunch, which was odd, as was the supermarket, but we found a place selling pizzas and got a few to share.

I consulted the Google maps on my phone, I had roaming coverage on the Swiss SIM, but it was a bit patchy where we were. A few cyclist pedalled pass, a couple of other cars as well. We piled back into the car and set off after them. We drove for another 30 minutes or so before we hit the town of Lamoura, and the inevitable traffic jam. We each took it in turns to do a 3 – 5 point turn and head back out of town to find somewhere to park.

We walked into town and found a good spot in the shade to set up the chairs we had liberated from our AirBnB. Bob and I set off down the road, I was looking for a good clear position right on the edge of the road, preferably with a corner, on an incline, I managed to find one.

Across the road from me was a group of locals and who appeared to be the one local “Police Municipale’ officer keeping them in check. The locals were spending the time before the race came through fixing up their costumes of underwear and capes, as well as checking for any last minute spelling mistakes in what scrawled across their bodies, and buttocks. They were also warming up their air horns, others were checking the wiring on a car horn and battery they seemed to have freed from the confines of a car earlier in the day. It was hot, very hot, but this did not deter the locals from cheering every passing car, cyclist (spectator) or motorcycle that passed them.

After a while the front the caravan of advertising started to roll through, handing out bottles of water, and throwing lighter items at the groups of fans on the side of the road. We all scrambled for some of the stuff, that seemed to be mainly cheap keyrings advertising their brands.

The caravan thinned out, and more official cars started to come through, and the armada of helicopters arrived, as well as the one fixed-wing aircraft used to get the TV signals from all the motor bikes.

The first rider came through solo, Lilian Calmejane (Direct Energy), had had a gap on a pursuant Robert Gesink (LottoNL–Jumbo). It was another minute or so before the next group came up the road, the remnants of a breakaway from earlier in the day, still ahead of the peloton.

Another gap, a couple of team cars for riders in the break and then a relatively reduced peloton rolled through, with Sky keeping everything controlled.

The crowds started to thin slightly, and I started back up the road towards where I had left mum and dad. Riders were still coming through in smaller groups, and ones and twos, I paused every so often to give them a cheer as they rode pass.

I found everyone back near where i had left them, and we packed up our chairs and made a dash across the road while there were no cyclist about, and headed back to the car. If we could make a quick getaway we might not get caught in too much traffic trying to leave.

We headed back the way we had come, through the forest, dodging traffic, cyclists, and briefly being held up by Nemesis.