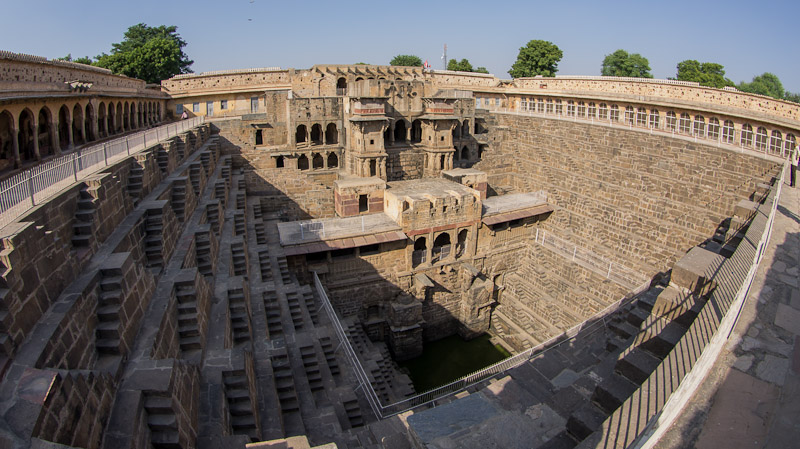 We checked out of the hotel and got our luggage out the front and the door man asked for our driver’s name. “Praveen”, he went over to the desk and picked up a phone, which was connected to a really REALLY loud megaphone pointed at the car park. There were about 10 cars and drivers waiting for their passengers. “Something something Praveen something something” and one of the cars started moving.

We drove through the town past a few places I recognised from the day before. It took a while to negotiate the markets, camels, trucks and bikes. We got to the outskirts, where there is a gumtree lined dual carriageway from Agra to Jaipur. This doesn’t mean the traffic is better behaved, our drive stuck to the middle of the road, straddling the two lanes. There were still tractors coming up the wrong side of the road and tuk tuks doing 20kph in the right hand lane. Sticking to the middle of the road seemed like the best plan. It also helped avoid the camels that roamed the place.

Our first stop on the way was Fatehpur Sikri a large complex built in the 1500s of red sandstone. It was abandoned in 1585 not long after it was complete due to a lack of water in the area. Our driver stopped in a car park a little way off from the site. A local tourist bus took us from then to the site.

A local was rather insistant that we go and stand in a particular sport to take a photo of the mosque. He kept pushing my Dad taking him away from where we wanted to go, and he was just too polite to say no. I eventually caught up to him and we headed back the way we wanted to go. The local decided to follow us for a while, occasionally telling us to turn left or right away from where we wanted to go. We got a tourist bus back to where our driver was waiting with the car. There were a number of shops and the owners were very active in trying to get us to go in. “I will be very sad if you don’t come in and look. It cost nothing to look. Don’t make me sad.” I made a few of them sad I guess then. My Dad (again) was just too polite and he went into one shop, but then Mum walked off so I went on with her till we found our driver again and went back to get Dad. He had managed to buy just one or two things for around AUD$4.

We set off again on the road to Jaipur. We planned to visit a large bird avery we had read about, but Praveen explained that it was closed at the moment. Some kind of dispute between the people running it and they had to close it, but he knew another place we could stop on the way. He said it was 10km off the highway but wouldn’t take too long. 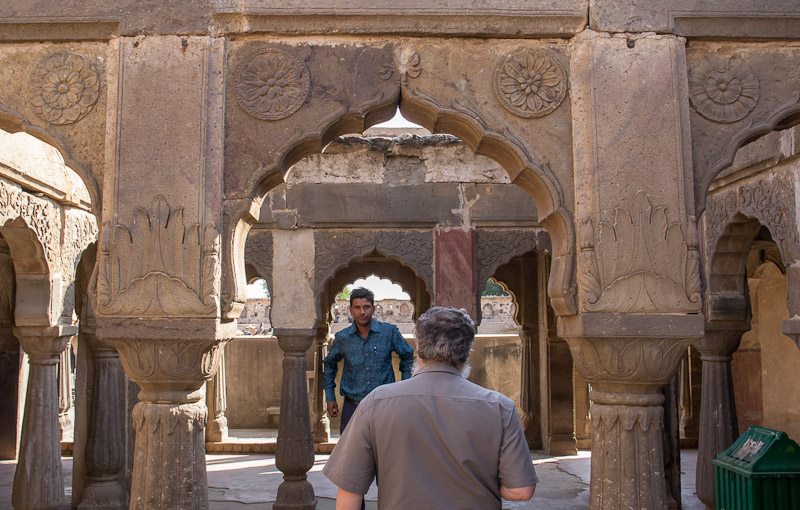 We stopped in an unassuming village with one man standing on the side of the road wearing western clothes. He greeted us and took us through the archers at the entrance and onto the terrace around what ended up  being a rather large hole in the ground. The Chand Baori step well. It was built in the 9th century. We were glad we went, it was well worth the stop. One of the oldest things we saw in the whole trip.

There was also an ancient temple next door built at a similar time. It had been destroyed but “pieced” back together. There were pieces of ancient carved stones lying around the grounds. Our guide was happy to take us around this place as well. But the tip at the well was only for one monument, at least he was clear before we started and explained that. 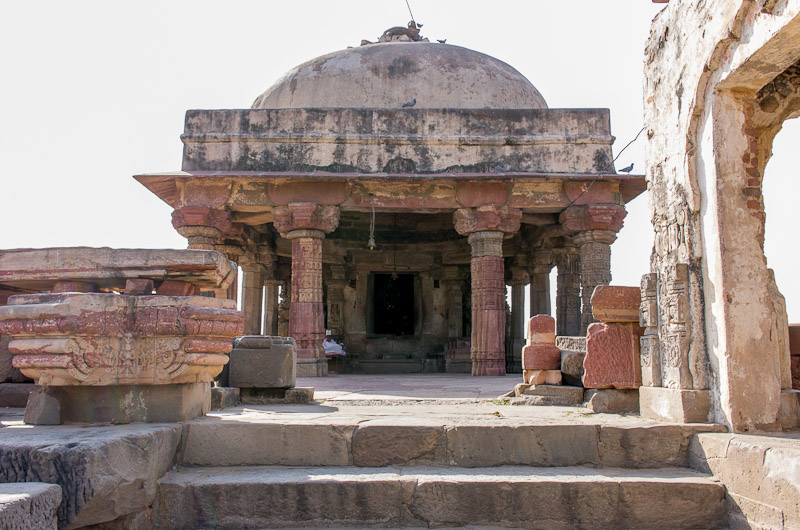 We headed back to the car and set off again for Jaipur. The rest of the drive was rather uneventful, until we got to the outskirts of Jaipur. We noticed a couple of cars coming back up the road, on the wrong side. Not the first time we had seen it, so nothing to be to concerned about. But then there were more, and more. Eventually an entire lane on our side of the dual carriageway was heading back past us. Instead of a dual lane highway with cars going east one side and west the other, it was like there were two single lane roads running parallel. We had slowed, and the horn was getting a fair workout. Even the service roads on each side had traffic going both ways on them. A few cars ahead were stoping and turning around. We forged on. Traffic had slowed to a crawl now in both directions. An exit off the highway was closed, with construction. Most of the road was missing, and there were a few trucks driving around in the dirt. Praveen kept heading on. We didn’t need to exit, but there was also a barrier blocking the highway into Jaipur. He pulled up and looked at someone who seemed to be trying to direct traffic / herd cats. We managed to get through and after a few hundred metres driving through gravel we were back on the road.

Our hotel in Jaipur was in an old “palace”. For dinner that evening we dined in the garden with some dancers and a fire-eater.