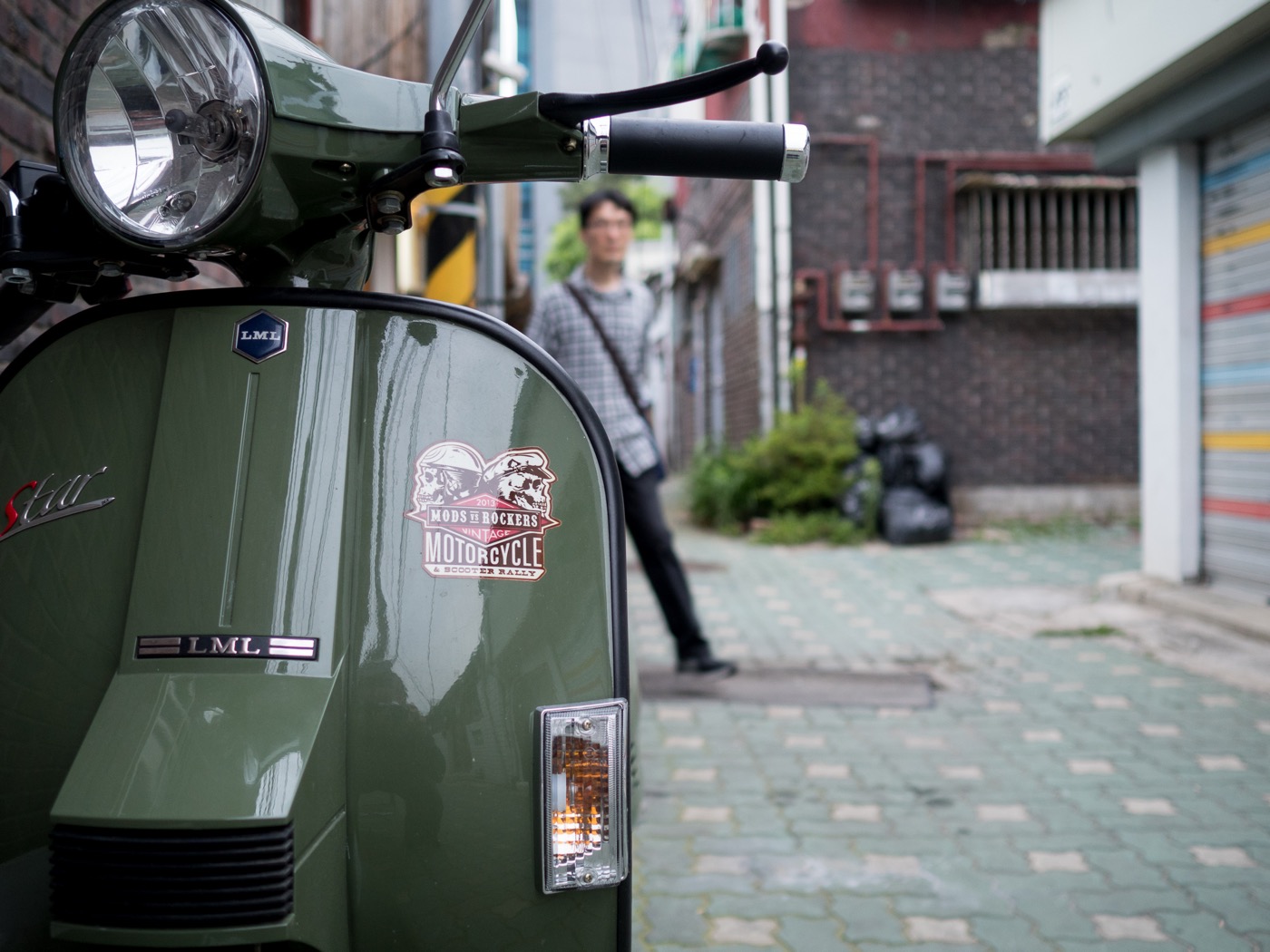 I had an early start today, a very early start. I had to catch the first train out of Shinjuku going to the airport for my whirlwind trip to Seoul, Korea. To make getting around easier I arranged to leave my suitcase at the hotel in Tokyo, and just take a backpack with me.

Because umbrellas in carry-on bags seem to be a no no, I put that in my suitcase. Because I didn’t have an umbrella it was raining. Because it was raining and really early the closest subway station entrance was closed. I ran from alcove to alcove along the street. When I did get to Shinjuku station not all the entrances were open yet. More running around in the rain and I made it in, and headed for the line going to the airport.

The airport was still waking up when we got there. I checked-in on a screen and made my way efficiently through security. Most of the shops were still closed, even the fast food chains were still opening up. I hadn’t been able to find a vending machine and settled for Macdonald’s for breakfast.

It’s only a 3 hour flight to Seoul. We landed, piled out and headed towards immigration. Helpful people were trying to manage the queue and provide directions to people. We all ignored the ‘do not use your phone in this area’ signs and connected to the free Wi-Fi. I tried sending a message to my friend from high school I was visiting, he tried calling me, while I was busy being polite to the border official.

I skipped the baggage carousel and made my way to a bank of bank ATMs. There were some experienced travellers at a currency exchange handing over large wads of Japanese and US currency.

OK, this was getting more annoying. I had some Japanese currency, but not a lot. I also had $150US for emergencies in my passport wallet. Second machine, Australian savings account EFTPOS card, YES!

Loaded up with Won I head to the bus ticket counter for a coach into the city. I landed at Incheon. Seoul’s newest and biggest airport opened in 2001. I reached the head of the queue at the coach ticket counter, there was a slight murmur from the person behind the desk as they stared at the screen in front of them. Assuming they were busy with something I waited. Another murmur, still not looking up.

Still not looking up they handed me my ticket and I went outside to find the bus stop and queue. I then played the interesting dance of trying to get on the free Wi-Fi inside the airport, whilst remaining in the queue for my bus. If I faced the wrong way, lifted my left leg slightly, while raising my right arm I was still unable to get back on the Wi-Fi, I accepted my fate and put my phone away.

There was a baggage handler patrolling the lines, checking tickets and directing people to the right queue, while positioning their bags ‘just so.’ He greeted people in Korean, Spanish, Chinese, English, and apologised for not being very good at German.

Our bus arrived and we all got on. It was just over an hour into the middle of Seoul and the stop closest to the hotel. There seemed to be Wi-Fi on the bus, but it seemed to not be free and I didn’t have the right accounts to try and connect. I was only going to be here for a couple of nights, so I didn’t have a SIM card.

The bus stopped a couple of times. It went past the main gate of Gyeongbokgung. I jumped off the bus and paused to get my bearings. No Wi-Fi, and no Google Maps. I did have offline maps stored in Maps.Me (totally worth it when working completely offline, or where Google is limited). I got my phone out.

I thought Alex wasn’t able to get the morning off work, and was only going to catch up with me later, but he managed to wrangle it somehow and was waiting at the bus stop for me. We marched off towards the hotel, half following my nose, and half Alex’s directions. The hotel was nice, very nice. Nicer than usual, but for two nights, and with discounted rates / frequent flier points it was still much cheaper than my last two nights in Shinjuku.

After dropping my bag in my room and taking a moment to look out the window we headed off to find food for what I think should have been lunch, but I wasn’t sure on the time. Turns out there isn’t a time difference between Seoul and Tokyo, all my calculations had assumed there was one for some reason. 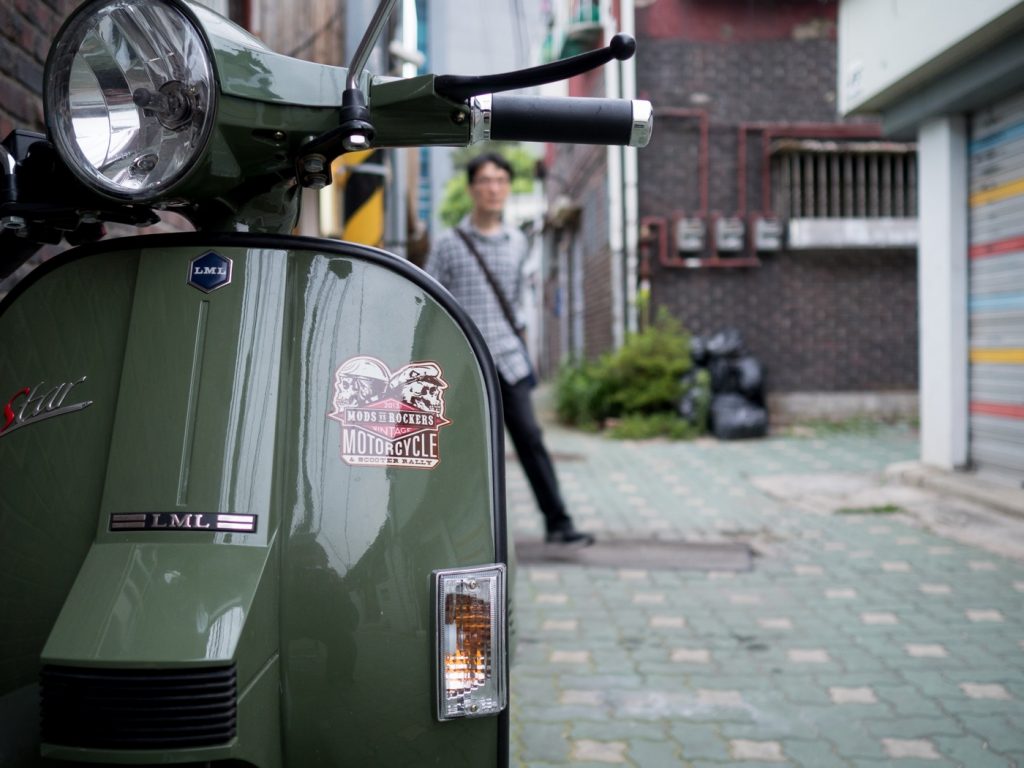 Out in front of the hotel was a large area of single story buildings with small walkways between them, the type of streets that don’t have names, but the locals know where they are going and post somehow still seems to make it to an address. Most of the places seemed to be small restaurants, cafes or pubs. It seemed to be just a little bit hipster in places. Insadong wasn’t the party / nightlife area like Gangnam (Yes, that Gangnam, from that song) but there were a lot of places to eat and drink. 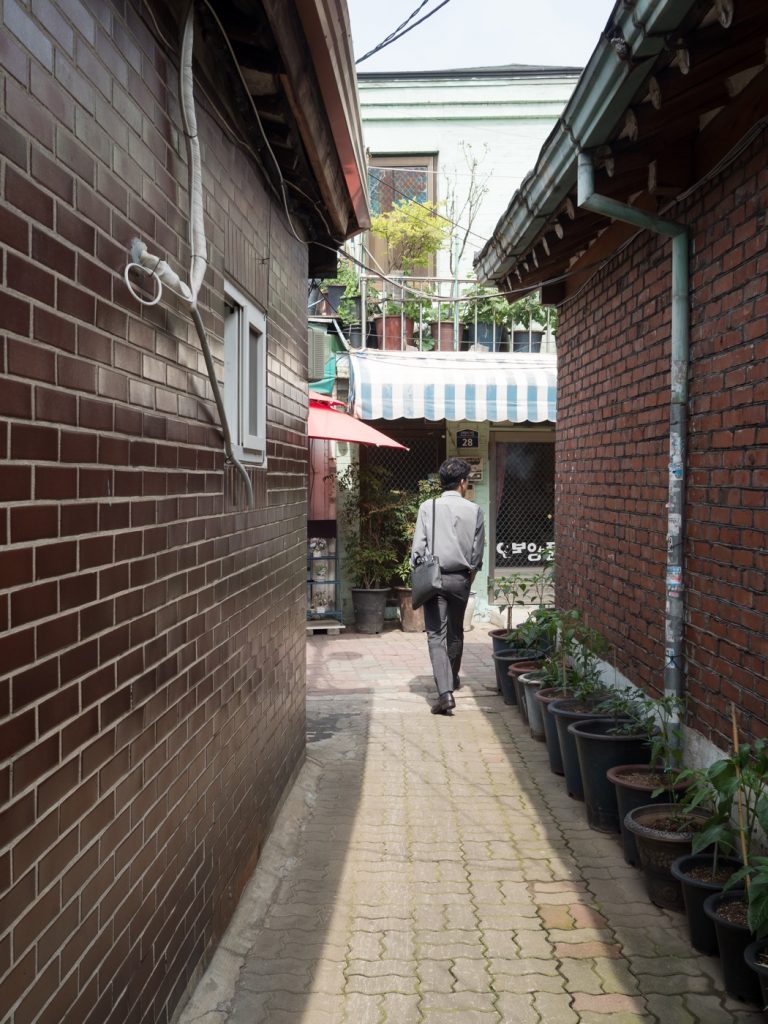 Alex wanted to take me somewhere he knew, but it didn’t look like it was open for lunch, or it was after lunch time and not yet dinner time. Either way, it wasn’t open. Undeterred we walked on until we came across a small place that did noodle soup (a if not the staple). Alex carefully inspected the menu, made some inquires, before declaring it acceptable and we should take a seat.

After lunch and a brief catch up Alex headed home and I went back to the hotel. We agreed to meet tomorrow morning for a some site seeing.

Later in the afternoon I went exploring  across the way from the hotel. The restaurants were getting busy, and the streets were filling with chairs and tables. I didn’t see many, if any other tourists. There were quite a lot in the hotel, here for a conference, but the little cafes and pubs were full of only locals.

I wasn’t up to ordering in Korean with out assistance so I played it safe for dinner. Directly across from the hotel was a sandwich bar, with handmade sandwiches. Despite the blazing fast internet, they still make sandwiches by hand. 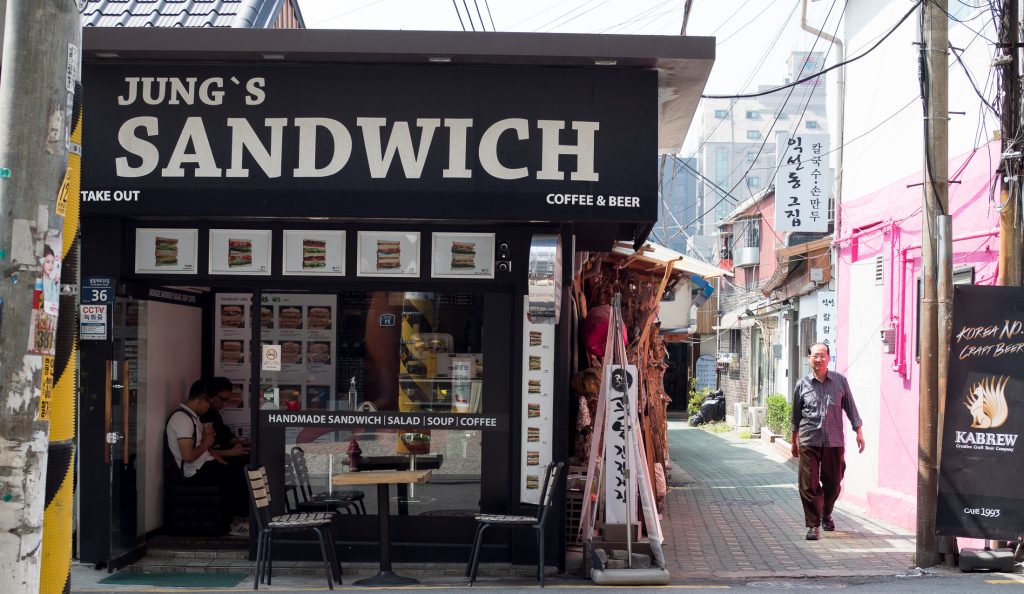 The sandwich was amazing. There was more chicken than bread, and it was very fresh, and almost certainly handmade. It was also not deep fried, something a friend had warned me about. During a visit many years ago they had struggled to find simple food for them to eat when they weren’t feeling the best. They ordered a cheese sandwich and for reasons known only to the person making it, it was deep fried – not the best when you really wanted a very plain cheese sandwich.