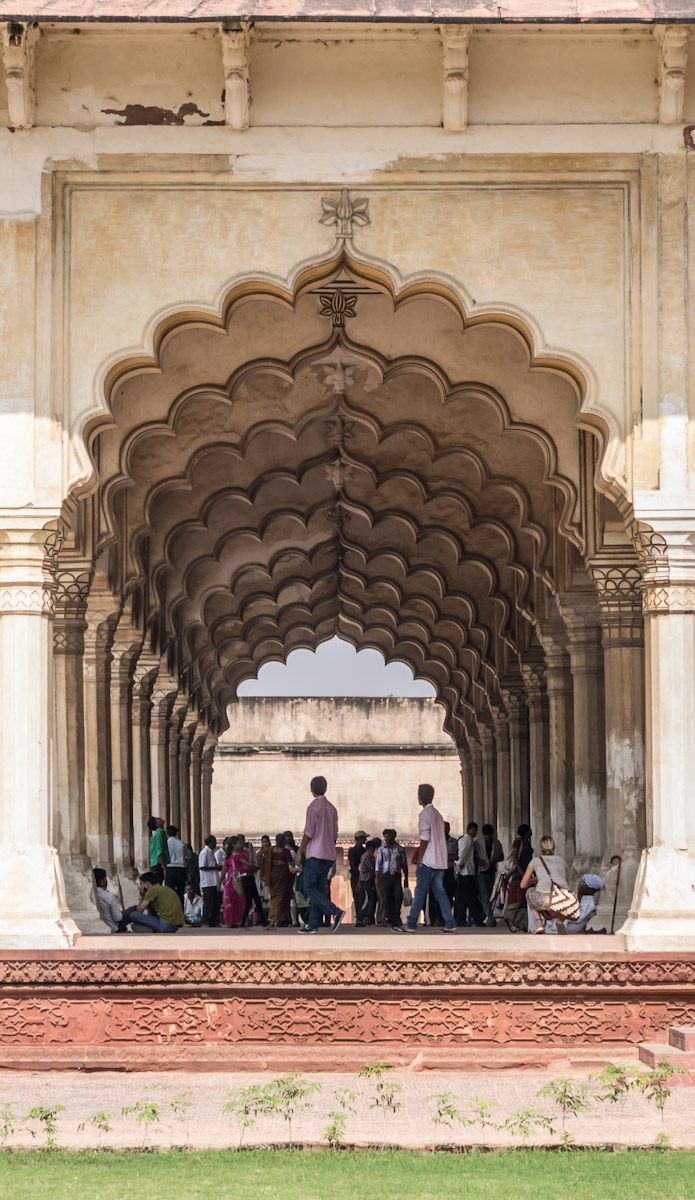 After a rather busy morning at the Taj Mahal we still had the rest of the day in Agra. After an awkward breakfast where we were asked how it was going several times between mouthfuls we met back with the guide and headed off. On the way to Agra Fort he said they had a place to show us that wouldn’t take too long. We had specified in the contract with the travel agent that we never wanted to be taken to any markets or other random places that we didn’t already agree to. With some annoyance we proceeded onto a place where they make marble goods with inlaid stone, some thing we had seen a fair bit of at the Taj Mahal.

We were greeted by someone at the place who took us pass two large marble lions that were a work-in-progress and into a small room with three people sitting on the floor working on some marble. The boss explained what the guys on the floor were doing. Chiselling out the marble and shaping the small stones to inlay.

After telling us about the work we were ushered into the showroom. A large room with some other people standing around the outside. We were asked if we wanted a drink or any refreshment. This is where we really started making a stand against force sales, refusing tea, coffee, and beer. The boss sat us down and started on his sales pitch of the work. Showing off the durability of the marble by pouring coke on a table and hitting it with a bottle. Part way through the lights all went out to show us what it looks like when you shine a light on it, this did explain the people on the edge of the room, who were there to man all the light switches.

After politely refusing any of the items in this show room we started making to the door, but were intercepted and redirected to the back of the room and into another adjoining showroom. “If the items in here are too big to carry or ship we have smaller items in here.” This is where my parents lamented and bought something. A small marble “thing”. I have no idea what it was, just a small round disk of marble with some stones in it that looked good. We were then allowed to exit through the back door and found our way back the guide and driver. “You liked it in there? Buy lots of things? We can now go to Agra Fort.”

The driver dropped us and the guide off and we headed past a large number of beggars and towards the gate / ticket booth. The guide disappeared to get our tickets. They are very handy for things like that. Our guide showed us around, but didn’t quite get the idea that we would stop and take photos, Dad and I seemed to be playing constant catchup.

After building the Taj Mahal  Shah Jahan was imprisoned by his son in Agra Fort for nearly bankrupting the economy, where he could see the Taj Mahal.

After the Fort we got back in the car and headed off to the Baby Taj, another mausoleum that is often said to be the inspiration for the Taj Mahal. This was our lat stop of the day. We asked the guide if there were any other temples or other places of interest, but were told that we would see them in Jaipur, so there wasn’t much point showing us anything more in Agra. A slightly strange answer, but after getting up really early we didn’t mind an early evening and headed back to the hotel.

For dinner we lived dangerously and went to the India restaurant in the hotel, instead of the coffee shop that sold western food. We were in India after all. We got kebabs, dhal, biriani and a couple of other things that were suggested. It was all really good, something we did have to tell the staff repeatedly as they constantly checked on us. We weren’t even the only ones in the place, yet they hovered like expectant … things which expect something? I use a phrase I never thought I would ever use, but have a couple of times since, “Can you please pass the <food> quickly so I can server myself before he comes back?”