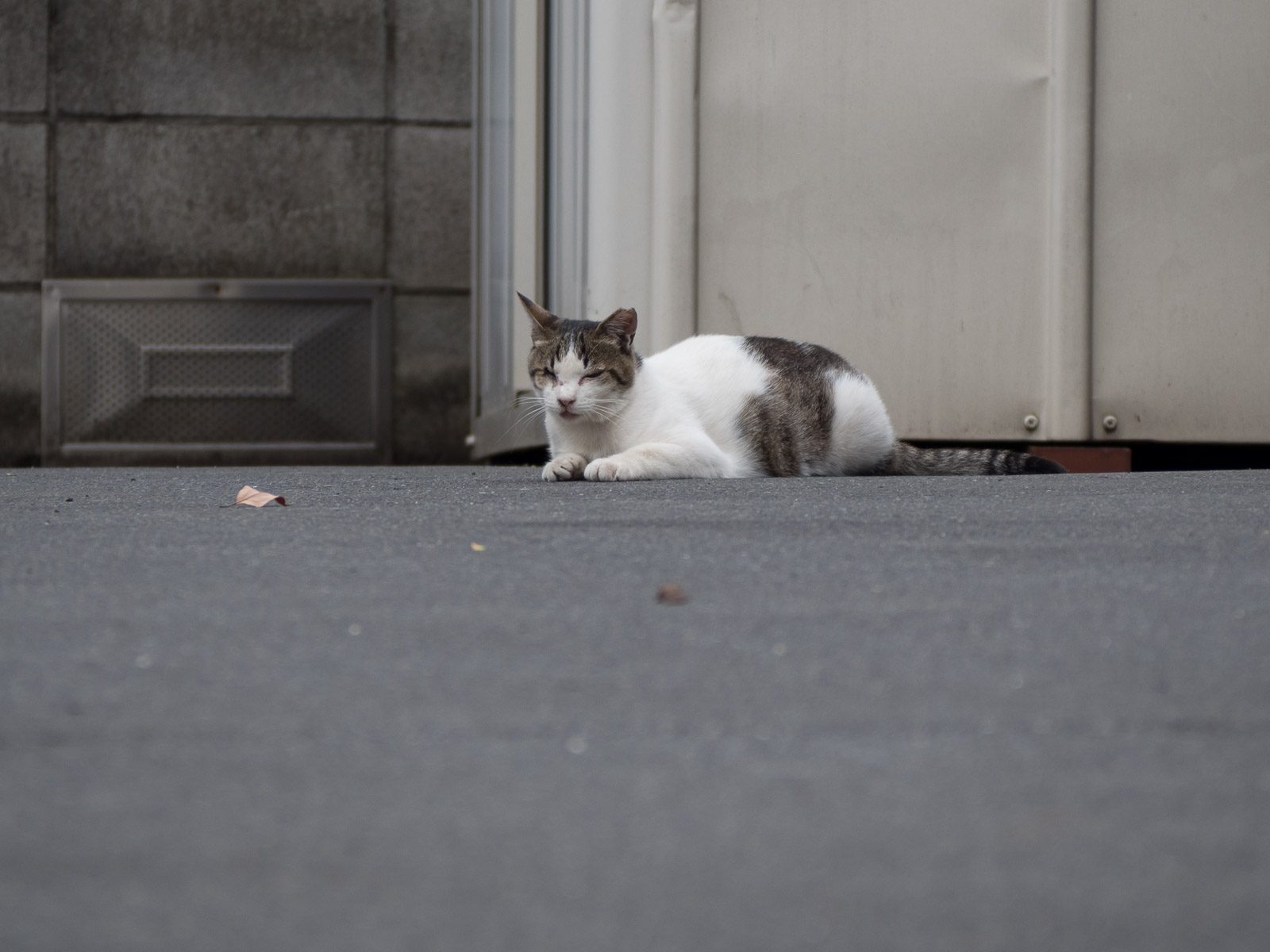 When planning our trip one attraction we did want to see was Mount Fuji. We read up on the best places to go and visit, I checked with a friend from work, and it definitely sounded like the best idea was to go to somewhere where we could see Mount Fuji, and get a good view of it, not Mount Fuji itself. There were options for a guided tour, or a bus trip from Tokyo, but we were confident we’d be able to do it on our own on the the trains. Mum wasn’t feeling the best in the morning, so dad and I set off with our JR passes on our own.

Our first train was from Shinjuku on the Chuo line. It wasn’t long on the train from Shinjuku before we left the suburbs of Tokyo and entered fields and green mountains. The stations got slightly further apart than on central lines, and we were able to get a seat. There was still the ever-present school children in uniforms.

I think this was actually one of the first vending machines with food and not drinks I saw.

Informative sign shows you what carriage you are on.

We are on the 5th carriage

We changed to the Fujikyuko Line at Otsuki. This is where our JR passes stopped working and we needed to get a train ticket. There were convenient self-service ticket machines on the platform though, so we did manage to rush through to the platform and get the connecting train.

Hey! I’ve been there!

There is something uniquely Australian about the ability to pick on and troll unsuspecting foreigners, especially whilst overseas, without prior arrangement.

We knew we were heading to the end of the line on this train, so when it pulled into a platform with no more track we assumed this was it and got off the train, a couple of others did, but the majority of people didn’t even look up. We made it to the gate on the platform before I read the name of the station and realised this was not the end of the line. We jumped back on and found a couple of seats again.

An American on the train, I’m sorry a south Californian (as he introduced himself), was asking what stop we were at, and where the train stopped next, also confused by the train being at the end of the line, but about to reverse back out onto the line and head off in a different direction. There were two other Australians as well. In conversation the American mentioned he was going to Australia later in the year.

By this point I think the American had worked it out.

There wasn’t any time for all of us Australians to agree that we were going play the “everything in Australia will kill you” game, but there didn’t need to be. Our innate ability to play up to stereotypes from a Simpsons episode without prior arrangement is unbelievable.

If we had all spoken any longer he would have been watching for drop bears at the airport as he got off the plane.

We got of the train at the actual end of the line and tried to get our bearings. Looking at my phone and spinning around we worked out where we thought Mt Fuji was, and where we thought the lake was. Our goal was to head down to the lake and get a few photos of Mt Fuji across the lake, also lunch.

There was a local bus that would take us to the lake, but it was that far to walk so we headed off following our noses. They generally serve us well.

We headed slightly too far west before correcting down a small street and back north to the lake. Fujikawaguchiko is a resort town that seems to exist purely for looking at Mt Fuji. There are a series of lakes with hotel dotted around the sides. At this point the priority shifted to lunch and we headed into a convenient convince store for sandwiches and meat on sticks. There was a picnic table near the lake where we both set out cameras up to take time lapse videos of the clouds while we ate.

There were some some small pedal boats and a ferry on the lake. After lunch we concentrated again on trying to see Mt Fuji. It was quite an overcast day. We had decided to go today because the weather later in the week didn’t look as good, but today wasn’t the best either. I opened Google Maps on my phone and started to try and find photos of Mt Fuji near by to pin point their location. I jumped into Flickr as well and managed to work out where on the lake was the best place to be, right over the other side, about 5 km around.

We manged to decipher the local tourist bus timetable and route and and waited for the next one. There was some extremely confusing instructions at the bus stop, and even more confusing ones when got on. Take a ticket. Ride the bus. Pay. Get off. That all kind of made sense, but the implications was there was lag between the getting on and taking a ticket and the actual paying. I looked at the bus driver and they looked at me. I handed over a few coins, he gave my a ticket and I made my way to a seat.

The bus went around the lake, stopping next to the hotels. The friendly bus driver called out the stops as they came up. This is when I realised I had made a terrible mistake. As the people got off the bus they handed back their ticket and a few coins. The ticket said where you got on, and the cost was calculated when you got off. This made a bit of sense given this seems to be how all public transport is charged – by distance. When we reached the end of the bus line, on the opposite of the lake I waited to let everyone else off first. I handed over my ticket and the looked at me, clearly I was not the first foreigner to do this. He took out a calculator, held it, closed his eyes, and did a bunch of math in his head before putting the calculator down again. We agreed on the difference in fare that I owed him, paid up, and got off.

We could see where we thought Mt Fuji was supposed to be, but it was still very overcast. We both set up our tripods and I disappeared inside the gift shop to get a postcard. We waited around for quite a while the clouds moved about, but they never completely cleared. We spotted what was the lower slopes, but didn’t managed to see the rest.

Mt Fuji is that way!

One day it’d be nice to stay there.

Back in Tokyo we found a grill for dinner, it was just a door between two other shops with a set of stairs down to 3 or 4 tables that were very tightly packed. There was one man taking orders and delivery food from a dumb waiter. There must have been another set of tables somewhere as people appeared from nowhere, paid and left up the stairs.