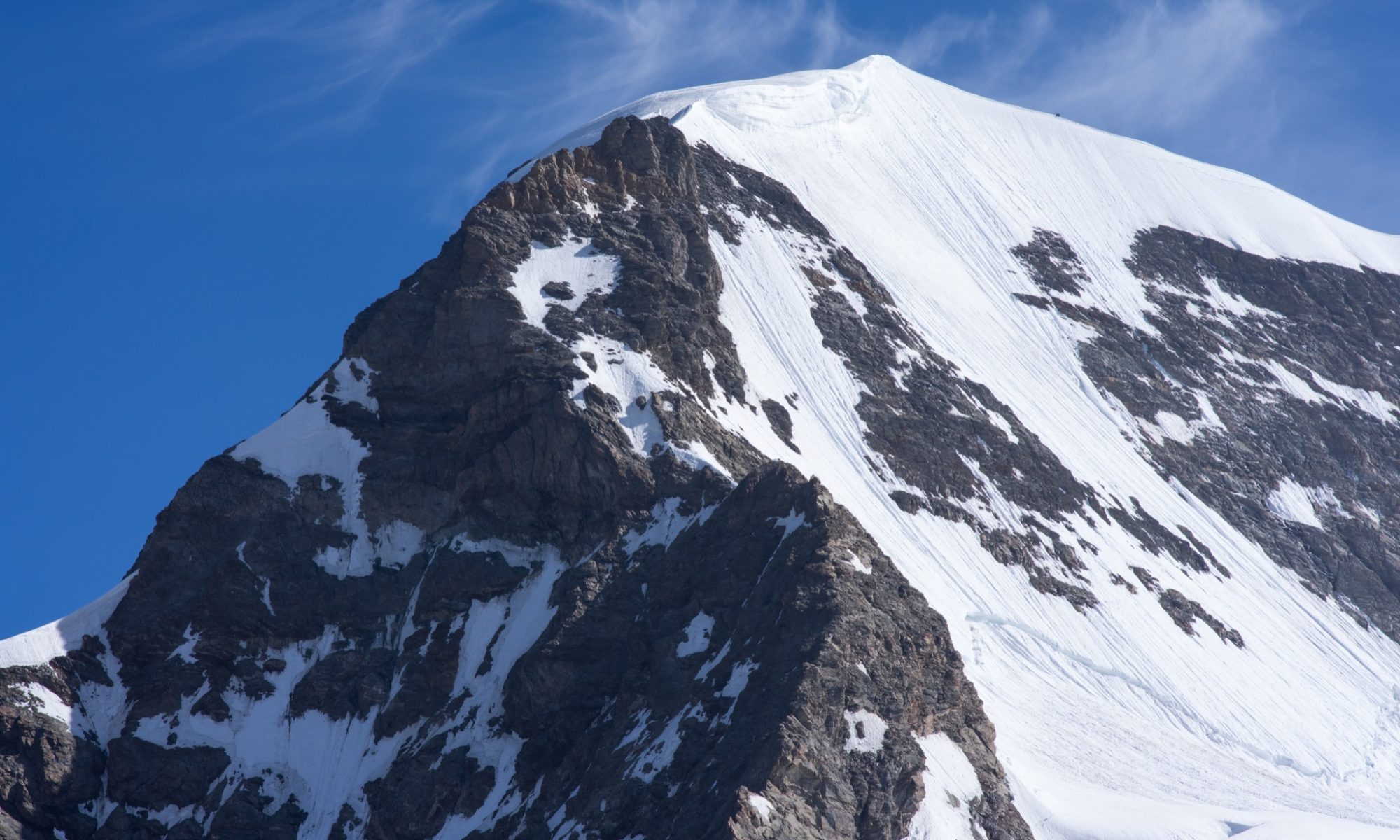 Our second day in Switzerland started quite early. We had booked on the train to travel to Jungfrau the highest train station in Europe, up in the alps. The tickets we bought meant we had to head up early in the morning, and head back well before the last train. We drove the car down to Interlaken Ost station and got there way too early. The platforms weren’t open yet. There were a few other people in the car park getting their gear together, climbing harnesses, ropes, toe clips. I had my camera bag with all my lenses, a couple of lenses, and a jumper.

The first train took us up to Grindelwald. It was still very early, and there weren’t many people about. A few buses were dropping off tourist who would be catching the train from here up to Jungfrau. We found a hotel that was serving breakfast and stopped for coffees and croissants.

There were a few more people milling around now waiting for the next train. This one would take us up to Kleine Scheidegg. This is where the train started to get steep, really steep. The trains were on tracks with a rack-and-pinion system.

The train was quite full, even though it was very early. We weren’t the only ones with the cheap tickets. This leg of the trip was quite long, and slow going on a lot of the steeper grades, but there were some fantastic views out of the train.

Kleine Scheidegg was quite busy by the time we got there. There were queues for the next type of train that would take us up inside the mountain. The Swiss are very good at putting tunnels through rock. We were already quite high at this point, over 2,000 metres, and the air was getting a little thinner.

The next train was specifically designed to go up inside the mountain. The seats were deep and reclined slightly back so if you were facing downhill you wouldn’t topple out onto the person opposite you. As the train made its way up it had a couple of stops at some lookouts cut into the mountain. These were as much about the view as they were for getting you used to the altitude on the way up.

The top was almost 1.5km higher in altitude from Kleine Scheidegg. At each stop I jumped out of the train with most of the other passengers and headed to the cut outs in the cliff. The helpful staff on the train reminded passengers to let them know if they felt unwell with the altitude.

The train got to the top and we all piled out, slowly. The air was quite thin, and we could all feel it. We found a couple of seats to rest on for a moment inside. There were a few windows to look out and a couple of stores selling cup-noodle.

After getting my bearing a bit more I decided to walk out towards the top, slowly. It was surprisingly humid and a bit stale inside and I wanted some fresh air, even if it was thin. There was a long tunnel that headed through the mountain and came out onto the snow.

The air was crisp and clean outside. I instantly felt much better than I did sitting down inside. I didn’t venture too far out. I had a coat and hat, but not the most appropriate shoes and I was still moving quite slowly. There were quite a few tourists who had dressed in an even more inappropriate fashion for the snow and altitude, two of them were complaining their socks were getting wet. There were a lot of Swiss casually marching off into the snow for a walk up to the summit.

I went back inside the tunnel and headed towards a couple of lifts to take me to the observation deck. There was a large number of tourists waiting for the lift, along with someone to restock the chocolate bars at the snack shop. I got on the lift first with the trolley of snacks. A lot of the tourist were from Japan and I think the sliding doors on the lift triggered something in them, they thought it was a Tokyo subway car and they all charged on in a crush. The store clerk with the trolley was trying ask them to stop pushing and to wait for the next one (in about 30 seconds), but they kept trying to get more people onto the lift.

They didn’t seem to mind the falling ice.

The views at the top were quite spectacular.

I headed back inside where I was not surprised to find a watch shop. Any opportunity.

I went back to the lifts, and headed back inside the mountain. I found my parents back where I had left them earlier. Mum wasn’t feeling the best with the altitude. They had been for a walk, but hadn’t made it outside. We checked the timetable and thought it was best to catch the next train back down the mountain.

The trip down wasn’t as slow as the trip up, but we still stopped a couple of times before emerging from the rock with a clear view of Kleine Scheidegg.

Dad and I left mum to have a rest before the next train back to Grindelwald and take some photos. While we were looking the wrong way there was quite a roar coming from the mountain. We turned around to see the tail end of a small avalanche. A snow shelf had collapsed and we could see a bunch of rock, water, and snow tumble down the side. I figured this was a common occurrence, no one seemed too fussed and it was getting into summer and the snow was melting.

We caught the train back down the Grindelwald and then changed back to a “normal” train to Interlaken.