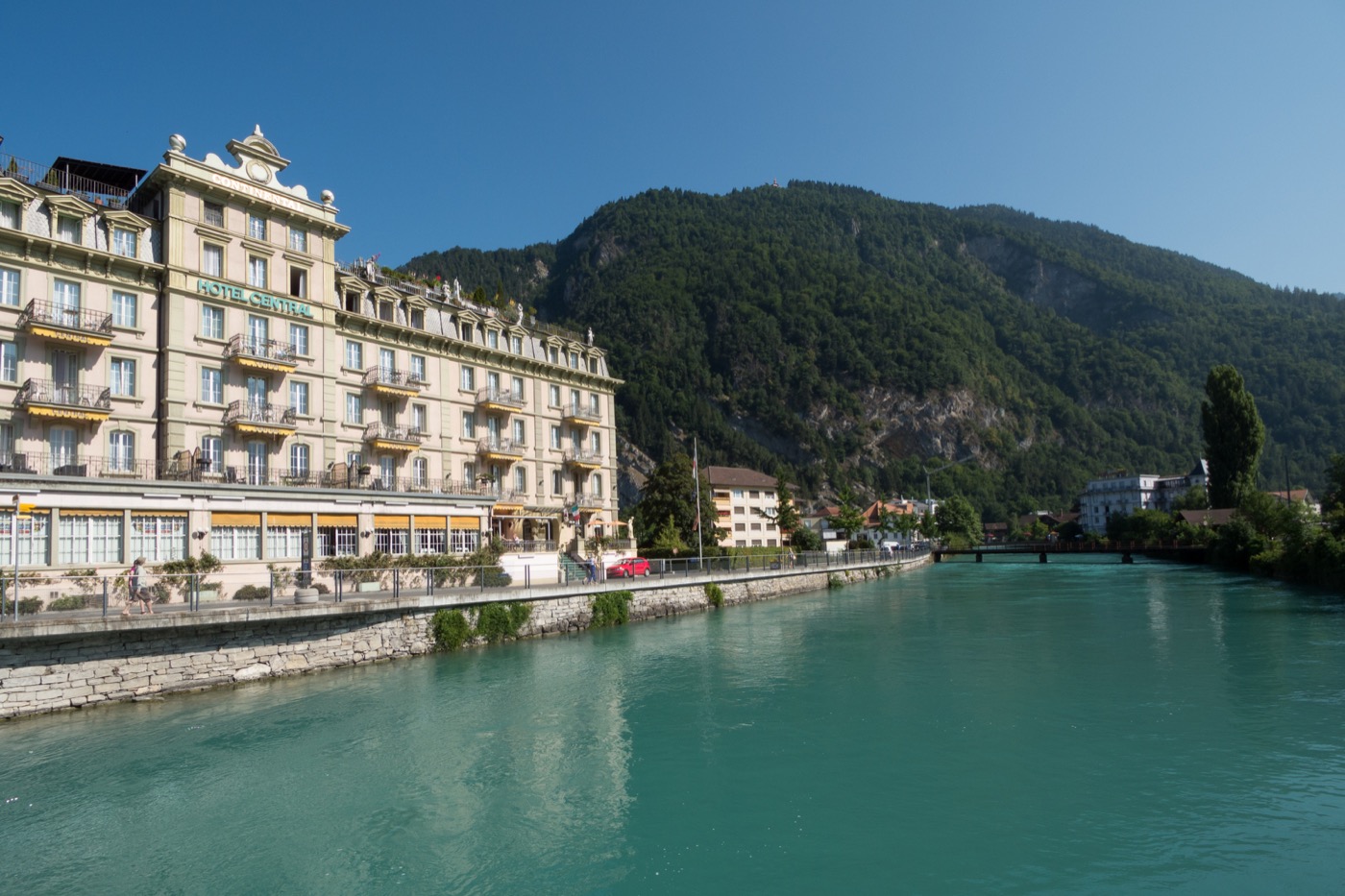 We had a couple of trips out of Interlaken planned for the time we were there, but the first order of business was a Swiss SIM card. Having done the appropriate research ahead of time I headed into town to find a friendly Swisscom store. Another tourist was trying to purchase a SIM but had not brought the requisite paperwork, his passport. It is easy to get a prepaid SIM in Switzerland, they have a handy form for it, but you do need a passport and a local address – your hotel.

We actually stayed in Unterseen

Our first trip out of Interlaken was to Lauterbrunnen, by train, fiercely efficient Swiss train. Interlaken to Lauterbrunnen isn’t far, it only takes about 40min on the train. After we got off the train in Lauterbrunnen we caught a local bus to Trümmelbach. Like the trains the buses seemed to keep to an exact timetable. It wasn’t early, and it wasn’t late, it arrived at Trümmelbachfälle precisely when it was scheduled to do so, somehow they know exactly what the traffic is going to be ahead of time.

The bus dropped us off at a carpark next to cafe, and we walked down the path towards the entrance to the falls. Like most things in Switzerland, it wasn’t cheap.

Not a bad place for a bus stop

We took the lift to the top of the falls. The Swiss love putting tunnels and things inside mountains. We went up to the top, before i walked back down the stairs, visiting the falls as I went down. It is a bit surprising to find so many waterfalls inside a mountain. Usually you’d see them cascading off a cliff into a river, but here they burst through fissures in the rocks and churning through small pools with apt names like The Washing Machine.

As you walk back down the stairs you get a good view of the valley.

We wandered back towards the cafe and bus stop. There was already quite a few people waiting for the bus so we decided to have lunch there and wait for the next one. On the way back we got off one stop early from the train station and walked back towards another waterfall, Staubbach falls. This waterfall came flowing over the top of a cliff and down into valley. From the base of the falls there is a walk up a mound and then through a tunnel (the Swiss and their tunnels) that takes you right up into the cliff and behind the waterfall.

From the top you get a good view of the valley below.

There were a lot of bikes, and quite a few were e-bikes, cheats.

We jumped back on the train and headed back to Interlaken. We headed towards what we hoped was shopping centre, it appeared to have underground parking and a fairly constant flow of cars and people, it was. It also had this great little self-serve restaurant thing where you loaded up a plate and got charged on the items or the weight, depending what it was. I got a biscuit

Possibly the greatest powerpoint of all time

One thing about Switzerland is it isn’t like the rest of Europe, they are fiercely independent, and just a little different. When I got to the hotel room the day before I had discovered that not all of my electric plugs fit, the only one that did was one of the Apple adapters from the world travel kit. I could charge USB devices, or my laptop, but none of the camera gear. Dad had a power plug that fit, so I left my battery chargers for my camera with him to charge. I was a bit annoyed that the plug was just different enough that I couldn’t plug in my power board. But, when I saw the plug design in the cafe thing at the shopping centre I was quite satisfied that this could be one of the greatest power points of all time, how it neatly let you use three things at once , and they were nice enough to provide two USB ports as well.

That evening we had dinner at a restaurant down the street from our hotel. There were a few people amassing on the other side of the street all in similar uniforms. The waiter explained that in the town square that night there would be a performance by some locals of traditional song and flag throwing, because that is a thing they do here.

One Reply to “Switzerland, Day 1 – Trümmelbachfälle”