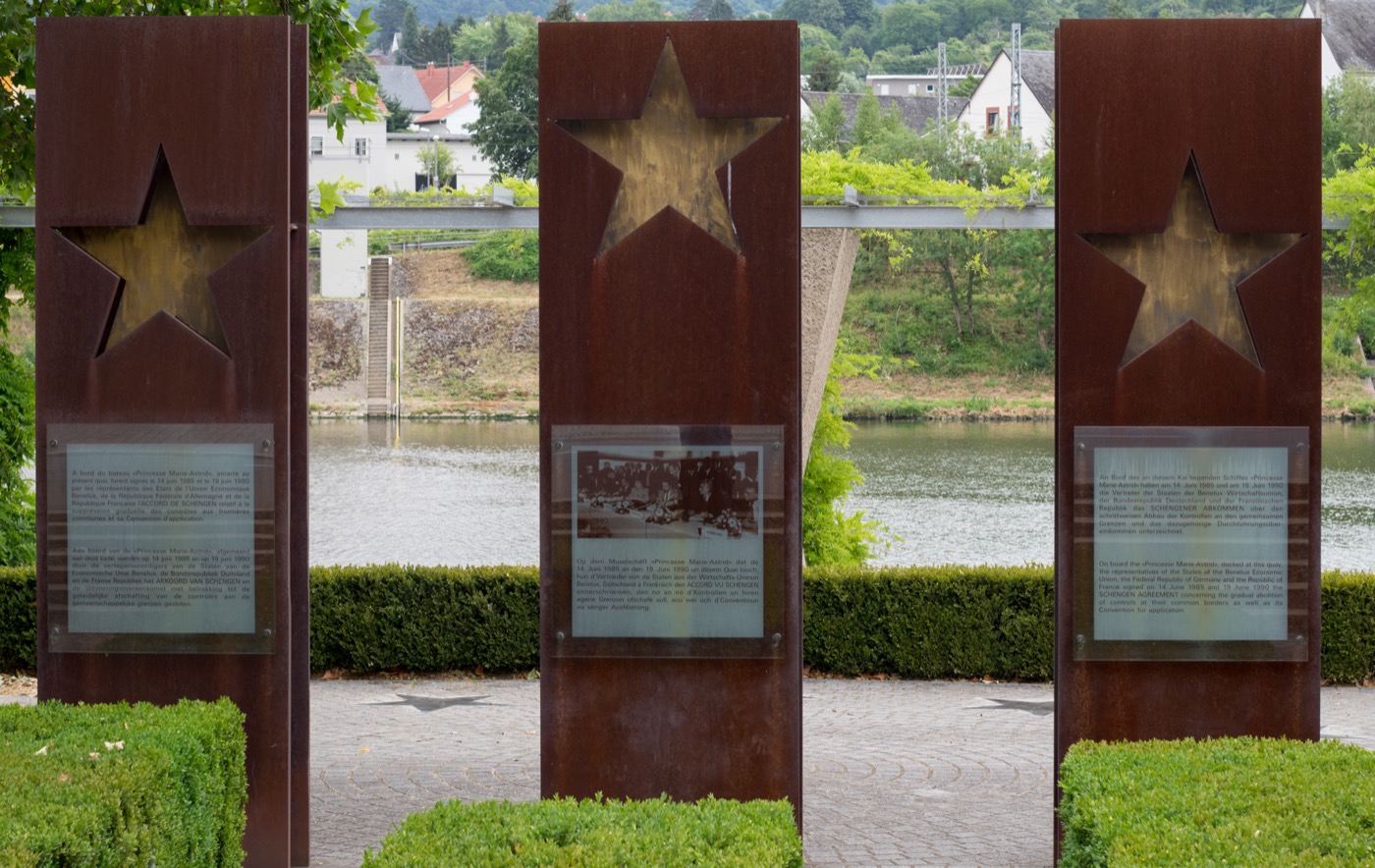 The drive from Luxembourg to Interlaken in Switzerland is a bit over 5 hours driving time, depending on route. We decided to stop in Schengen on the way.

After driving through the outskirts of Luxembourg city we found ourselves surrounded by fields and farm land, while still in Luxembourg. Most people, including myself, think of Luxembourg as a small city-state, and it is tiny. But outside of the city is farmland, and many small villages, all connected with single-carriageway country roads. The (ever growing) city of Melbourne is over three times the area of the entire country of Luxembourg, and about the quarter the size of Switzerland, which is less than a fifth the size of the state of Victoria. (Research limited to the useful cards in Google Search.)

We followed Mrs Tomtom the best we could, until our route was interrupted by roadworks and a quick u-turn.

One of the small villages we drove through

Correct use of English is important in Luxembourg

There were a few cyclists around, and unlike the majority in Holland or around Amsterdam they were wearing lycra and had many gears on their bikes. What hills were lacking in Holland were more than made up for Luxembourg. We arrived in Schengen and located the visitor’s centre. Schengen is important in Europe, for the location of the signing of the Schengen Agreement, allowing for free movement of people throughout most of Europe, including non-European Union member states (Switzerland, Iceland, Norway). The Schengen Agreement has been discussed a lot recently in Europe with the current refugee crisis as thousands and thousands of people flee war in the Middle East. The Schengen Agreement does allow member countries to close its borders, and the UK isn’t part of the Schengen Agreement (because islands are different? *Cough Iceland cough*).

The best/simplest explanation of the European Union including Schengen is probably CGP Grey’s fantastic video.

Locks from all around Europe

The Berlin Wall keeps popping up all over Europe

The river where the Schengen Agreement was signed

We spent about 40 minutes looking around before getting back into the car and heading once again towards Switzerland. Today was Bastille Day, which did mean the highways in France were fairly quiet, without too many big trucks, but it did also mean a lot of things were closed. We did find a service station to stop at for lunch, but it didn’t have Wi-Fi, and I had run out of any roaming data on my mobile days ago.

More countryside that I was expecting

More farming than I was expecting in Luxembourg

We arrived at the border between France and Switzerland. This was the first border we had crossed that had people at it. We worked out the main point of this was to pay the toll to use the motorways, some cars were being looked at, but the majority were just waved through. We didn’t have many Swiss francs on us, so dad jumped out of the car to see if he could find an ATM at the shop. He was quickly told to get back into the car, which he did. We moved up in the line and a polite Swiss man stuck his head in the window and said something in French to us, mum and I looked at him and said “Ahhh?” Our Belgian rental car had French plates, and we were driving in from France, so it was a good assumption we might speak French. “English?”

“Ohhh, so sorry. Yes, of course. The motorway toll is some francs, you will be able to use the motorways for some months until the sticker runs out.”
“Can we pay in Euros?”
“Of course. It is €40, and I will give you 7 francs 50 cents change for you to buy some Swiss chocolate in the shop.”

We paid the toll, got our Swiss francs change and headed onto the motorway, I have no idea where the cars came from, but for the first time that day we had quite a lot of traffic to contend with.

Our hotel in Interlake was pretty small. It had a restaurant out the front, and our rooms were on the 2nd floor with balconies overlooking the mountains. Really, you could look in any direction and see mountains, but the balconies faced the alps and towards Jungfrau.

That night I set up my little Q7 to take a video of the alps as the sunset.