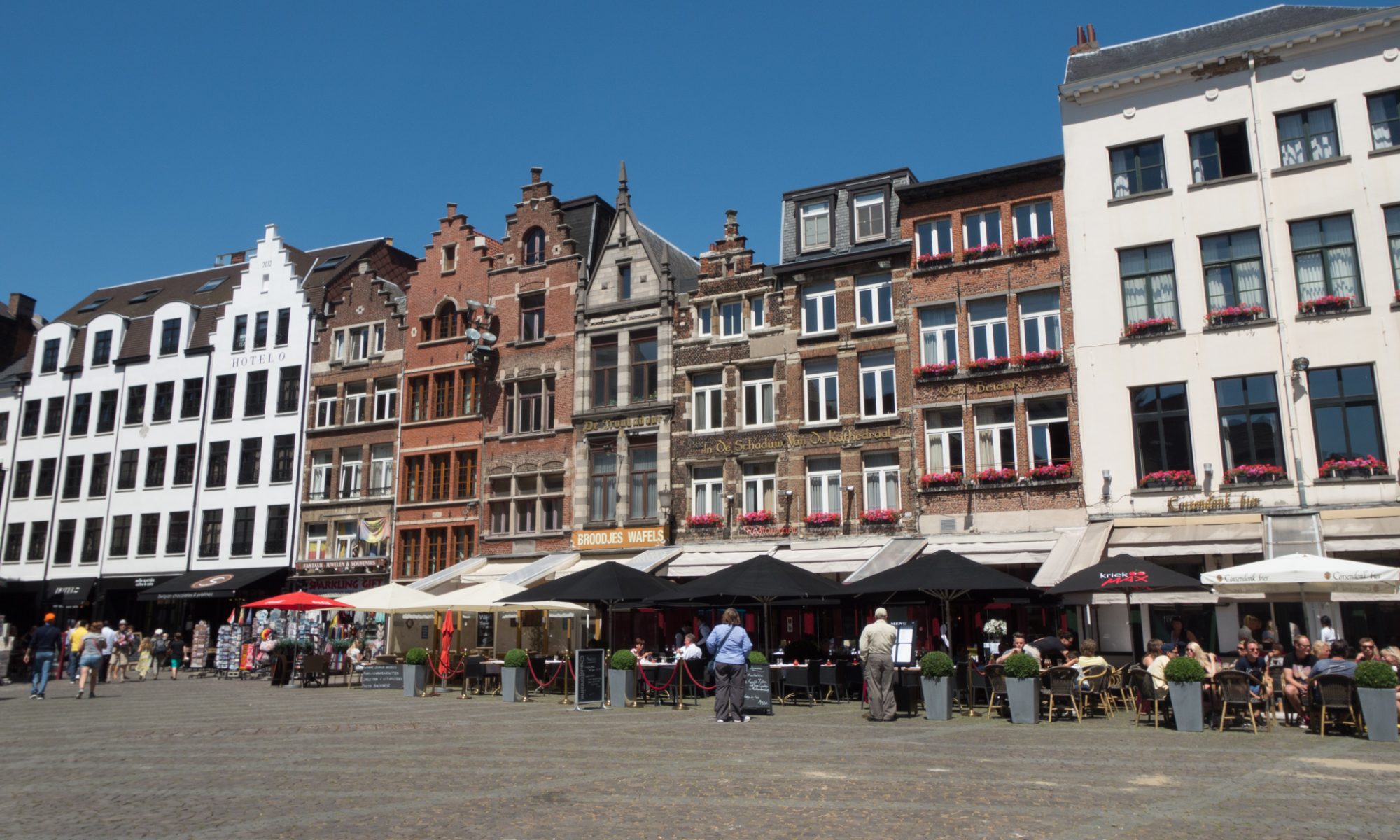 In the morning Dad and I left the hotel to collect the rental car from the central station. Gare du Midi is much larger than Gare du Nord, where we had been taking trains from. There were a lot of shops and places to eat. We found all of the car rental places together and commenced negotiations.

I had booked and paid for the car months ago, and they were expecting us. We collected the keys and head down to the car park through a lift with a magic barcode that gave us access. There were a couple of employees who spoke very little English preparing and cleaning the cars. We found our mini van, an upgrade on what we had paid for, and started giving it a quick once over.

Annoyingly the spare tire was in the back of the car. We spent a few minutes trying to work out where it was supposed to go. We couldn’t lift the carpet in the back. Dad started looking the manuals, I searched YouTube. The spare tire is supposed to be suspended under the rear of the car. There was a bolt in the back that was wound with the same wrench used to take the wheel nuts off. We spent a food 10min looking for the tool kit to try and attach the spare wheel to the car, but couldn’t find it anywhere, it wasn’t where YouTube said it would be. We tried talking to the employees in the carpark but were told it would be best to ask upstairs.

Back in the office they couldn’t understand what the big deal was. Why couldn’t we just leave the spare wheel in the back, there would be enough room for our bags. Dad was trying to explain that the issue wasn’t the spare wheel, but without the tool kit and the ever-important reflective orange triangle one places at the side of the road in the event of a breakdown we shouldn’t be driving anywhere on the freeways. We weren’t just going to be pootling around Brussels, we had six countries to visit in a couple of weeks.

We had paid for an automatic, but the only other car they had available for us was a manual, and much smaller than the mini van (however more inline with what I had booked). In the absence of any other options we took the keys and headed back down to the carpark wit the special barcode to get into the lift. The car was a beat up Ford Focus. It was covered in small dings and scratches. It had no rental car stickers on it anywhere, I guess they didn’t want to admit ownership. It was the best rental car for a two week whirlwind tour of the Benelux States with a little of Switzerland and France thrown in.

I setup my Xiaomi Yi action camera on the dash, checked which side of the steering wheel had the indicators, and we headed out of the carpark and into a traffic jam. A couple of bikes weaved their way through the gridlock while we waited behind a bus. By now my phone and the TomTom had gotten a GPS lock and were competing to provide directions back to the hotel. Dad directed me as we followed the traffic in whatever direction it was we were going. There were a couple of moments of indecision and I went down a tramway taking evasive action to try and avoid some very large car sized holes in the road. The locals gave us a very strange look as a randomly pulled out of the tram lines and back into traffic. After a few minutes both the TomTom and my phone agreed on the right course and I started to recognise where we were going from my taxi ride on the first day. We got back to the hotel, parked in the basement and went to collect our bags.

We headed out of Brussels and onto the motorways. Dodging roadworks and big semi trailers. Our first stop was Antwerp.

These things were everywhere!

We found a Greek restaurant in Antwerp!

We found a carpark on the edge of the city centre near a large hotel and set of walking towards the cathedral and town square. We even managed to find a post office to post some postcards. We spent a few minutes look at all the places to eat around the square before picking one for a quick lunch before we went inside the cathedral for a look around.

After we were done looking around we headed back to the car and got back on the motorway, this time heading to Baarle-Nassau.

As we got off the motorways the roads were much quieter, and smaller, but we still had to contend with the occasional many tonne truck. The roads seemed to be two very wide bike lanes with a single shared car lane in the middle. You travelled somewhere near the middle most of the time before diving to the side when there was oncoming traffic.

Baarle-Nassau is an interesting village on the border between The Netherlands and Belgium. The borders in Europe can be ambiguous at the best of times, but this place takes it to a whole new level. The streets have lines drawn on them showing the boundaries. We had an ice cream, and waffles at a little café for afternoon tea before resuming our drive Amsterdam.

Our hotel in Amsterdam was quite nice. Dad had managed to secure some kind of an upgrade, which was also nice. After dinner of burgers in the hotel restaurant we started planning our one day in Amsterdam. I booked tickets for all of the museums and downloaded PDFs of the tickets.

While it is fairly easy to move around Europe, data on your mobile phone doesn’t seem to always follow you. I had paid ‘some euros’ to give me 200MB of data when not in Belgium, but I think that accidently disappeared when I wasn’t looking, as data tends to do, so I headed downstairs to the lobby to print off all the tickets. They lobby PCs were using an interesting Linux-based stateless shell that you logged onto with a name (any name, it wasn’t important or linked to anything useful like your room number) and then seemed to serve up Windows applications like Internet Explorer and Adobe Acrobat through a Citrix session. I logged into my email, which immediately made my phone beep to let me know I had logged into my email, and printed off the tickets for the next day.